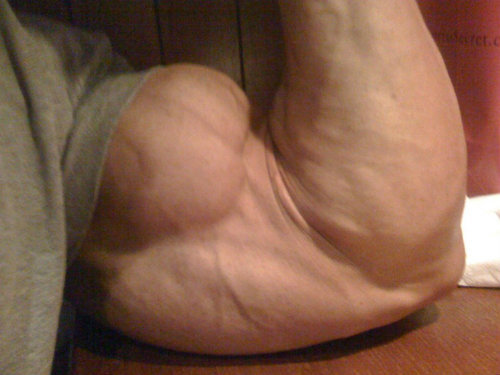 Another exciting installment from Hugh.

This is my take on Part 4 to the awesome story started by turningalpha (Part 1, Part 2).

I opened the door, hit immediately by an amazing sight. Sebastian, huge, sexy smile spread across his face, stood staring down at me, his beautiful eyes covered up by his designer shades. His blond hair was swept to the right, curling around the top of his mirrored glasses, not a single hair out of place. He wore jeans and the same light blue sleeveless shirt he was wearing this morning. When he gave me that expert hand job. When he kissed me.

My dick had softened considerably on the way down the stairs, despite the fact that I could still hear my stud brother and his two friends fucking clear as day. But that didn’t last. It immediately demanded attention. Seeing this guy twice in one day was too much. Maybe if there was even a possibility of repeating that kiss, or being able to reciprocate with the hand job, it would be more bearable. But guys with Sebastian’s body and face just didn’t go for ordinary guys like me. At least, not in my world.

I stood there for a long time with my jaw dropped, drinking him in. He had his arms raised overhead, hanging off of the door frame. His shirt hung loosely on him, and I wondered what his six pack looked like. I knew he had a nicely tapered waist under that top, but couldn’t see it. His arms, loose and limber, had firm round horseshoes leading from his thick forearms down into his round shoulders. I wanted to lean in and smell his lightly haired pits, absorbing his masculine musk before diving in and bathing them with my tongue.

He leaned forward, towards me, close enough that I could feel his liquorice flavored breath on my cheeks. I had forgotten that he liked liquorice. “Carl…” he said, the edges of his delicious looking mouth still curled up playfully, “are you going to invite me in?”

“Oh! Shit! Sorry, Sebastian. Come on in.” I wrenched my eyes away from his overwhelming sexiness and moved back from the door. My dick positively ached.

The muscle god stepped into our house, and chuckled when he heard loud triumphant yelling coming from Bryan’s room.

I rolled my eyes, a little embarrassed, although I don’t know why. It was his friend causing all the nose. And Sebastian must be used to the sounds of someone moaning loudly. He’d caused them enough himself, on a daily basis.

I couldn’t stop myself from picturing some smaller muscle stud on all fours in front of Sebastian, Sebastian’s arms hard as they pulled on the guy in front of him, jamming his huge horse cock in and out of the guy’s tight hole. The guy moaning in pleasure around Sebastian’s massive fuck stick. I just knew Sebastian had a huge cock.

“That must be one of the hotties Bryan picked on his way back here,” Sebastian said, jolting me back to reality. He’d taken his shades off while I was daydreaming, and I started to get lost looking into his striking baby blues.

Catching myself, I looked away from the sun that was this guy’s attractiveness. I busied myself closing the door, then looking at the floor, then at the ceiling. Basically anywhere but at Sebastian.

He laughed softly, his velvety voice resonating in my chest. “I’m actually not here for Bryan, stud.”

Not here for Bryan? I looked right into his face, shocked. “You-you-you mean you’re here fu-fu-for me?”

His smile grew even bigger at my stutter. “My dick’s been hard and heavy all day just thinking of that hand job I gave you in the car this morning.” Then his voice got even lower, even manlier. Sexier. “Course, my dick’s hard and heavy all the time,” he said, palming the bulge which was even more prominent in his jeans now.

“I-I-I-” I panicked. This super-stud was getting hard thinking of…me?

“Would you like to return the favour?” he asked, licking his lips while he continued rubbing his hand against his pants.

My pulse raced even faster. I couldn’t believe this was happening. My head nodded as my eyes tracked his hand as it moved up and down.

He stopped rubbing his crotch, stepped right into me and moved his hand up to my chin, gently raising it up so that my eyes met his again. I blushed, then he leaned in and kissed me.

I can’t really say our tongues duelled. I didn’t put up any resistance, and he was the one leading. I just stood there while his tongue slid back and forth along mine, enjoying every moment. I started to wonder if his dick would feel as good inside my mouth, and hoped I’d get a chance to find out.

My dick stood at rigid attention pushing against my belt. I could feel my balls churning. This kiss was even hotter than the quick one we’d exchanged in the morning, and if I wasn’t careful, I’d embarrass myself. I tried to concentrate on breathing and controlling my pulse.

Then I felt his large hand palming my crotch. Pushing firmly against my swollen balls as it slowly made it’s way to the base of my shaft.

“Uh,” I said, breaking the kiss and pulling back quickly. The edges of his crisp blue eyes crinkled. I saw him swallow hard and his square masculine jaw trembled like an inexperienced teen. It was surprising to see on this incredible stud’s face, and even more surprising to think that I caused it.

“I, uh, gotta, uh, go sl-sl-slower,” I said, glancing down at his hand resting on the front of my pants and then back at his godlike face. I took small breaths, sipping air, teetering on the edge.

He said, “But don’t you want…” And then his eyes brightened, his mouth twitching into a smile. “Was little Carl about to shoot his load again?” he teased. “Sorry, dude. I forgot how hot I am,” he said, pulling his hand away from my dick. “Ok. I’ll tone it down.” Then he smirked. “A little.”

I stood there, swaying slightly, clamping down hard on my dick muscles. I closed my eyes. Another look at his face or his amazing body and I’d lose it.

I slowly managed to calm down, the feeling of inevitability lessening ever so slightly.

He watched me and chuckled. And hearing his voice had my balls churning all over again. “That’s not helping,” I said.

“Maybe you should just shoot now, to get it out of the way,” he said. He leaned even closer and wrapped me in his big arms. He pulled me tight into his body, grabbing onto my ass. He picked me up as if I was nothing and started rubbing my body along his.

“Come on, Carl,” he breathed onto my neck, sending shivers down my spine and straight to my dick.

I tried to hold back. I tried to think of puppy dogs; kittens; mid term papers. Anything but the muscle stud sliding me up and down his body as if I were his toy. I even tried to focus on the moans of the girls still coming from up stairs as they fucked my brother. Not that thoughts of my sex on legs straight little brother helped to calm me down at all.

“Shoot your load again for me,” the muscle stud whispered, his sexy  voice driving me wild. The sweet smell of his pure masculinity filling my nose and making me long to fall to my knees.

“Fuck,” I groaned. “No one makes me as hot as you do, Sebastian.” My dick spewed into my jeans. And it felt even hotter than it had in the back of the car that morning. Feeling his firm, defined and much larger body against mine. Being moved around as if I weighed nothing. Being brought to orgasm just by the feel of his breath, his scent, and the feel of my dick rubbing against him, even when it was separated by multiple layers of fabric.

“That’s exactly what I like to hear, little stud. Now why don’t we move this somewhere else? I think it’s time I paint you with my stud cream.” He pulled my hand down to his jeans, and forcefully moved it up and down against him. I could feel a large tube of man meat stretching down his front, and my mouth watered just thinking about seeing it.

My dick wasn’t quite ready for round two, and though I was excited, I could at least think a little now. A little. His musk still assaulted my senses, filling me with longing for more of him.

“Have you not got off yet today?” I squeaked out.

He tipped his head back slightly and snorted. “Right. Huge irresistible stud like me, not getting off? Dude, as if,” he said. “We toured the college today—”

“You were at my school today?” I asked.

“Yeah. They brought all of us seniors over to check it out.” Smirking again, he added, “‘course, Michael and I snuck off. We found some hotties that really dug us — well, we found the first of many hotties that dug us, I should say — and went back to their dorm room. We both lost our v-cards banging them and high-fiving. Once we got off inside their tight snatches, we switched girls and went again.” His monster cock got even thicker under my hand as he spoke. “We finished off by shooting another load each all over the faces. You should’ve seen it. It was hot!” Then his dick got even larger. Would it ever stop growing? It was so big. “Oh yeah, I almost forgot. We took turns banging one of the professors too. In her office! Michael fucked her mouth, I fucked her ass. She loved it!”

My dick twitched, starting to come to life at the thought of the two muscle studs fucking their way through everyone at my school. Then I thought about what he’d said.

“Wait a minute. V-card? But you guys have banged tons of girls at my school. And at yours. V-card?”

I bit my own lip, wondering what this muscle stud could have possibly been thinking about while fucking today, other than how hot it was. How hot he was.

If you enjoyed this scene, please let me know!