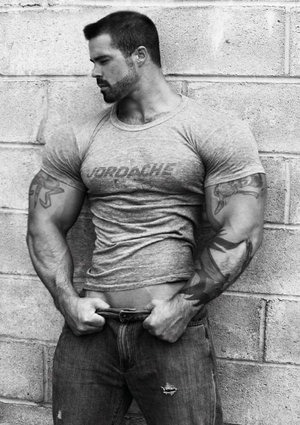 One of my writing heroes has just posted a brilliant continuation to my long-delayed series, Oblivious. Everyone should follow this man, and track down his hot muscle growth e-books on Amazon.

_This is my take on Part 3 to the awesome story started by turningalpha (Part 1 and Part 2). _

I got home from college around 3 that day. Normally I would’ve stopped and picked Bryan up on my way back, but he was hanging out with Jeff that day. I still wasn’t sure how I felt about that. Hopefully he and Jeff could talk, if Bryan needed to, about the fact that he now knew that I was gay.

I went to my room and spent a few hours completing one of my class assignments, trying not to think about how rough my ‘coming out’ had been to Bryan. Getting a hand job in the back of the car, while he was in the front seat? Not exactly the smoothest way for your brother to find out you’re gay.

Not that I could help it really; Sebastian is so damn hot. He’s tall, has huge muscles, and is so damn cocky about it. He knows he’s a walking wet dream. Just like Bryan’s other friends, Michael and Jeff. All cocky muscle studs that could have anyone they wanted, whenever they wanted. So could I really be blamed for shooting a load a few seconds after Sebastian wrapped his thick, powerful fingers around my cock this morning?

I sighed, trying to turn back to my homework. Just because I couldn’t help myself didn’t mean it was going to be easy for Bryan to accept that his older brother was into guys. I hoped, again, that his friends being ok with it would help him be ok with it.

Unable to focus on my assignments, I started to think about Bryan and his friends. How had he become friends with the three most popular jocks in his school? They were all similar when they were together, but Bryan spent his nights playing video games and reading blogs about geeky movies and comic books. His friends were a few years older than him, and definitely spent their evenings getting off. Again and again, in different people, according to Jeff.

Between the three of them, they’d slept with a large number of the girls in my college, and a fair number of the guys (for Michael and Sebastian). It was not uncommon for me to overhear a conversation about how hot the three oversexed, over-muscled boys were, just before class started. They apparently had massive cocks to go with their muscles, and I had never heard of a single complaint about their sexual prowess.

So why was my brother Bryan, a dorky dweeb and still virgin, hanging out with them? I loved the guy to death, but like me, he hadn’t exactly been blessed in the looks, height, muscles or confidence department. How he fit in with guys like Sebastian, Michael and Jeff, I couldn’t understand.

I heard the sound of keys in the front door, following by loud giggles. Was Bryan home I wondered? I walked out of my room and started down the stairs.

“Oh Bryan, you’re so hot. I just want to eat you up,” I heard a very feminine voice say.

“Ladies,” I heard my brother say in his deep, rich bass. “There’s more than enough of me for both of you.”

I got to the bottom of the stairs and saw my brother standing there with two gorgeous blond haired girls clinging to his massive round tattooed arms. My breath caught as I took in the sight.

He wore a gray t-shirt which stretched tightly around his thick biceps. It was an older shirt, at least two sizes too small for his muscular abundance. It stretched around his bowling ball shoulders, creating a crease of wrinkles where they met his rather large chest. The advertising text stood out sharply on the shirt, reaching across both of his meaty pecs, which formed a beautiful, jutting shelf. The shirt was pulled so taut by his arms and chest that it pulled up slightly around his tight, tiny waist, showing just the top of his adonis belt.

He was so achingly handsome! And such a stud. Barely eighteen, and he had the perfect black manicured beard covering his face. I could barely grow stubble, and he had a full beard already. His tattoo sleeves, one on each arm, complemented his look in exactly the right way, making it obvious to anyone looking at him that he was the alpha male in any situation.

My dick started to get hard as I watched him, flexing his arms for the two girls. He slowly noticed me watching, and his bearded face split into a huge grin. The hoodie I wore hung down over my crotch, thankfully.

“Ladies, why don’t you head up to the bedroom? It’s the first door on the left at the top of the stairs. I’ll be up in a few seconds,” his voice rumbled.

They quickly removed their shoes and walked past me up the stairs, giggling as they did. Fuck, this was going to be frustrating. Another night spent listening to my brother, the amazing fuck machine. Trying not to touch myself, not to listen against the wall, as they worshipped his beautiful body over and over again. As his huge dick spewed cup after cup of his stud cream all over the place.

“Fuck, bro, can you believe it?” he asked me. “I picked these two babes up on the walk back from Jeff’s. They were just walking by. I gave them a nod, and they were all over me!” He sound excited, like the virgin I knew he wasn’t.

“Of course I can believe it, Bry. You’ve fucked your way through half my school over the last year.”

He shrugged his massive shoulders sheepishly, an impish smile on his face. “Guilty as charged, bro.” He raised both arms, flexing his biceps into huge balls of muscle. “It’s not my fault that everyone wants to feel these bad boys though.”

I swear my dick thumped in my pants at the sight. How could anyone be so hot? And how could I be so hot for my own brother? I didn’t really want him, but his body was so difficult to ignore. And it made my dick so hard.

I cleared my throat and tried to focus, my face dead serious. He dropped his arms and looked at me with concern on his handsome face. ? “Bry, I wanted to talk to you about this morning. In the car. With Sebastian…”

He laughed. “Bro, don’t sweat it. I’m cool with you being gay and all. I’ve known Seb and Mike are gay,” he said, his face crinkling slightly, “well bi, I guess, for awhile now. It’s fine. And hey,” he said, lifting his left arm again and causing it to swell even bigger, “if anyone gives you any grief over it, let me know. No one messes with my big bro.”

I gulped, wishing desperately that my pants weren’t so tented right now. I just nodded and said thanks quietly.

“I better head up, bro. I don’t want to make the ladies wait too long. I’m gonna let then take this shirt off and worship my muscles for a bit. Then they’re gonna take turns swallowing my huge cock, and then I’m going to pound the shit out of both of them. Sounds fuckin hot, doesn’t it?”

I nodded again, afraid to speak. I was so relieved my hoodie covered my bulging pants. Relieved that he didn’t know how hard he made me.

He brushed past me, his wide shoulders unable to navigate the staircase without pushing on me gently but firmly. Once he was above me, he turned his head back, a smirk on his face. “Don’t feel too bad about listening in, bro. It’s gonna be some crazy hot shit.” And he turned back and went up into his room, closing the door behind him.

Shit. He did know. Not that it mattered. I still followed after him, going into my own room and closing the door. I unbuckled my belt and quietly slid down my pants, tugging onto my hard cock to the sounds coming through our shared wall.

The girls’ were moaning loudly now, and I even heard one of them beg for my brother’s come. My balls pulled up to my body, my strokes got faster and faster. I could feel my own orgasm rising, getting closer and closer. And then I heard the door bell ring.

I slid my unsatisfied dick into my pants and made sure that my still hard dick poked up against my belt. I sighed, knowing that my super stud brother wouldn’t possibly take a second of break from stuffing his dick into one of his girl’s holes to go answer the door.

“Oh fuck! Oh fuck! Oh fuck!” I heard one of them moan. I groaned myself, annoyed that I couldn’t listen in further. I grunted quietly, and headed down the stairs. Who the fuck had chosen that exact moment to come to our door?