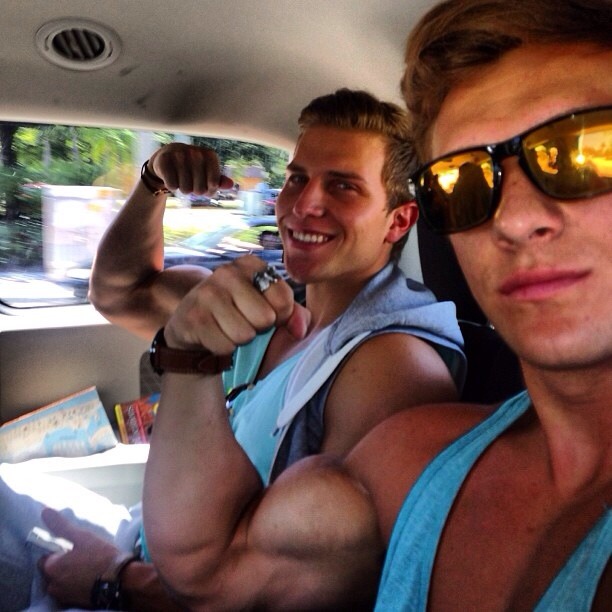 As I suspected, the boys did try to arrange to meet up with Jeff after school but Bryan had promised Mom to help me clean out the garage and couldn’t attend. I couldn’t help breathing a sigh of relief - I suspected that the boys were up to some to mischief but I had no idea what.

I tried to imagine Jeff hanging around with Sebastian and Michael for the evening. I couldn’t imagine what the meathead jock and those tiny introverted computer geeks could do together - did they really have anything in common?

Bryan was sulking all evening. It was obvious that he was really pissed off being stuck at home. Believe me, spending the whole evening cleaning out the garage with a petulant teenager was complete torture.

The next morning Jeff took over the morning run as he had the lend of his Dad’s car.

Bryan was still acting like a moaning git in the morning. It took him forever to get dressed and he kept playing with his food during breakfast. I tried to lighten the mood by chatting about video games and geeky movies but I couldn’t get a decent conversation out of him.

Breakfast got interrupted by the obnoxious blaring of a car horn. Jeff had arrived and subtle entrances were not his thing.

Bryan rushed out the door, finally free of his prison. I futilely attempted to shovel down the rest of my cereal and gather my belongings.

By the time I reached the driveway, Bryan had already called shotgun. He sat next to Jeff, his small and delicate body completely dwarfed by his super jock friend. Bryan was trying his best to act casual but I could tell that he was shaking with excitement. What the hell was up with him? One minute he was moping around like Eeyore, the next he was like Tigger on a massive sugar rush!

Behind him sat Sebastian and Michael, acting like the overly loud, overly confident and overly muscled studs that they were. They were grinning at me, their chiseled Hollywood faces set upon godly physiques. Their clothing were minimal, sleeveless vests and sweatshirts designed to show-off their mouth-watering brawn.

Oh fuck! I just realized that these two musclegods were really taking up a lot of space in the cramped car - I was going to have squeeze myself right up against Sebastian. There was no fucking way I could do that without sporting a huge erection!

I calmed myself down and got into the car, vainly trying to tuck my limbs in so that I could reduce myself further. It was no use, I could feel myself rubbing against every hard ridge of Sebastian’s perfect arms and legs. I carefully positioned my schoolbag to cover my lap, trying to act inconspicuous.

I tried to ignore my jock companions, instead focusing on the view outside my window and trying to clear my head and keep my rising cock at bay.

I heard the two jocks whisper to each other. They were always doing that. Whispering to themselves instead of talking to other people - for a pair of popular jocks, they could be really antisocial at times. It doesn’t seem to stop them from getting dates from hot girls though.

Suddenly Sebastian yanked off the schoolbag from my lap.

The most obvious bulge in the universe stood out hard against my right leg. I felt completely exposed as both jocks took in the sight of my bulge and then flashed me a pair of predatory grins.

“I knew the little fucker was trying to hide something!” crowed Sebastian. “Couldn’t help yourself, could ya? Having to squeeze yourself beside a hot muscle stud like me really fucking turns you on.”

He casually rested a meaty forearm across my waist, allowing his manly hand to lie limply against my crotch. I turned my head to look at Sebastian. His cocky smirk dared me to do something about it.

I could see my brother’s ears turn red with embarrassment. Jeff just laughed.

Oh, God! This wasn’t the way I envisioned coming out of the closet. Not with Bryan around too! I could feel my heart pounding like crazy. All I wanted to do was curl up in a ball and try to drown out the sounds around me.

A strong hug from Sebastian interrupted my thoughts. I looked up at him, his normally arrogant face replaced with a look of real concern.

“Sorry about that. Look, there’s nothing to worry about, Carl,” said Sebastian gently. “I’m only teasing you. I honestly didn’t mean to hurt you. Seriously, you’re still with friends here. We really don’t care if you’re straight or gay. And I don’t mind if you have a hard-on for me.”

“Besides,” he explained, as a wicked smile lit up his face. “You’ve seen Michael and I hang around with each other every single day for years. Did you really think that two hot fucking studs like us have never once experimented? We really do everything together.”

Then he and Michael kissed each other slowly and passionately.

My cock was really hard now.

Sebastian gave a little laugh as he felt my cock grow. He stopped kissing his partner, gave me another encouraging hug and began to undo my pants.

I could see Jeff rolling his eyes at Sebastian through the rearview mirror.

"Fucking queers,” he mockingly complained. He couldn’t help sending a cheeky grin at me. “You better not spill faggot spunk in my car.”

“Besides,” whispered Sebastian into your ear. “We’re not queers. We love the pussy too. Especially when we get to share it between us. There’s nothing like seeing a hot chick getting impaled on two porno-sized cocks, especially when one those cocks is mine.”

He enclosed my six incher with a masculine fist and slowly and assuredly massaged my cock. It was clear that he had plenty of practice jerking off other people’s dicks. He was good.

Sebastian raised his gooey fingers to his mouth, tantalizingly sucking them off one-by-one. He then grasped the back of my head with a strong hand and forced my mouth on to his. He growled as he kissed me hungrily, his cum-coated tongue squirming it’s way into my mouth and aggressively wrestling my own to submission.

“I hope that makes up for things,” Sebastian said when he finally broke the kiss. “Sorry I was a complete dickhead earlier. Let me know if you ever want to get hooked up with someone. I know plenty of guys who would find you cute.”

I groaned inwardly to myself. Shit, this was still not the best way to come out of the closet to your little brother!

Jeff laughed from the driver’s seat. He grinned mischievously to Bryan.

“Don’t worry Bryan. Soon you’ll be all grown up and fucking like a man too.” he said, like a father doling out some really twisted facts of life to his impressionable son.

I jumped a little when I finally heard Bryan speak.

“Carl?” he asked timidly. “Can I spend some time at Jeff’s house after school?”

What could I say? Jeff was a complete douche and I didn’t like him influencing my brother. But Bryan was obviously shocked at my actions this morning and I needed to tread lightly with him. Maybe it would be good for both of us if we spend some time apart this evening. Besides Jeff didn’t seem to mind me being gay, maybe he wasn’t as big of a jerk as I thought.

“Sure, squirt,” I said, trying to sound confident.

I did my best to ignore the wink Jeff slyly sent to Bryan.

What’s the worst that could happen?