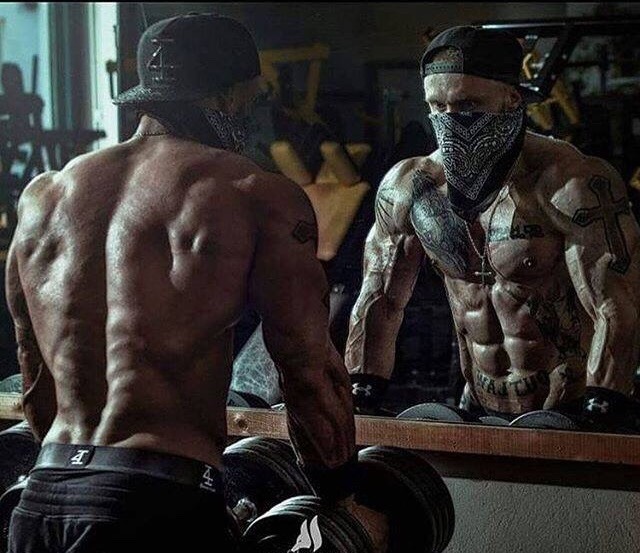 Jeff’s dick was rock hard. He suspected that it would always be rock hard from now on. Alongside his sudden surge to superman levels of testosterone, his virility had hit the ceiling - crashing through the next two levels of concrete floors in the process.

So, with his throbbing man meat clearly embossed against his sweat pants, Jeff watched his giant image reflected back from the mirror.

Shit, he was big now. A real massive son of a bitch. Thick muscles armored his frame - beastly looking slabs of meat that slowly rose up and down with his deep, manly breaths. He was ripped to shreds too, his skin wrapping-paper thin with girthy veins of blood powering his uber-body. He was tattooed to fuck and with the prepackaged clothing that was reminiscent of street gangs, everything about his visage screamed “tough guy”.

The last time he had looked into a mirror, his eyes would have been caring, but nervous. His pupils darting away from the mirror’s images through sheer embarrassment of having to look at his weakling form.

But that was before. Now the eyes reflecting back at him were the unwavering eyes of a confident and focused man. Maybe slightly crazed - his eyes held the determination of someone who devoted his entire day to pumping iron.

Jeff was one scary-looking motherfucker.

And it was turning him on so much.

Fuck, even his voice sounded so thick and masculine. He just wanted to take his straining dick out of his fly and jerk it off.

“Are you sure?” said the sales assistant nervously. “This body is a bit extreme. Normally, I wouldn’t advise jumping to such a high level. There are regulations that we try to follow.”

“Fuck regulations,” said Jeff loudly as he experimented with a crab pose that bulged his beef into a sickening relief map of veins and muscle fibers, sending butterflies to his stomach and caused his dick to spill precum.

He glared at the sales assistant. Early today, the man had been tall and imposing from Jeff’s earlier and much shorter point-of-view - a hunky guy with a perfect swimmer’s build that left Jeff embarrassed about his own frail body.

But now the sales assistant looked like a puny dork compared to the new and improved Jeff. Someone that after one fight with Jeff would be left a bloody stain smeared on the ground.

“You were told to shut up and do what I wanted weren’t you?” he said threateningly.

“Yes sir, but I think the body’s hormones may be affecting your-”

“It’s my father is paying for your salary - fuck, it’s his investment that keeps this place running.”

He turned to the mirror again, growling with joy as he pressed down on his abs and they plopped out against his thin skin like meaty cobblestones.

“Dad was tired of having a pussy for a son, you don’t want to disappoint him.”

Well, that wasn’t exactly true. His father was expecting Jeff to pick some kind of slim, male model type. And Jeff had been expecting to do that too - something to boost his confidence, stop getting bullied and finally get him laid.

Then the sales assistant had jokingly pointed out this brute of a muscle beast as a sure-fire way to earn respect.

And Jeff fell in love.

“But I don’t think he was expecting this. You’re so young…”

“But I’m rich. I’ve got a bucket list of jocks that need to have their asses kicked and a checklist of hot chicks that need to be shown what a real man truly looks like.”

“Listen up you little twerp. If you won’t give this body, my dad can find some other sales guy who doesn’t have the same level of ethics as you. And then I’ll have this sweet bod and you will have top billing on the bucket list of people that I really want to fuck up.”

Jeff pressed his thick fingers against the steel dumbbells, causing them to squeal loudly as he casually imprinted a massive paw print against the strained metal. He stared at the salesman with a smirk.

The sales assistant dropped his head with resignation.

“Good boy. Now punch up that receipt and leave the room - I need some private time with my new self.”