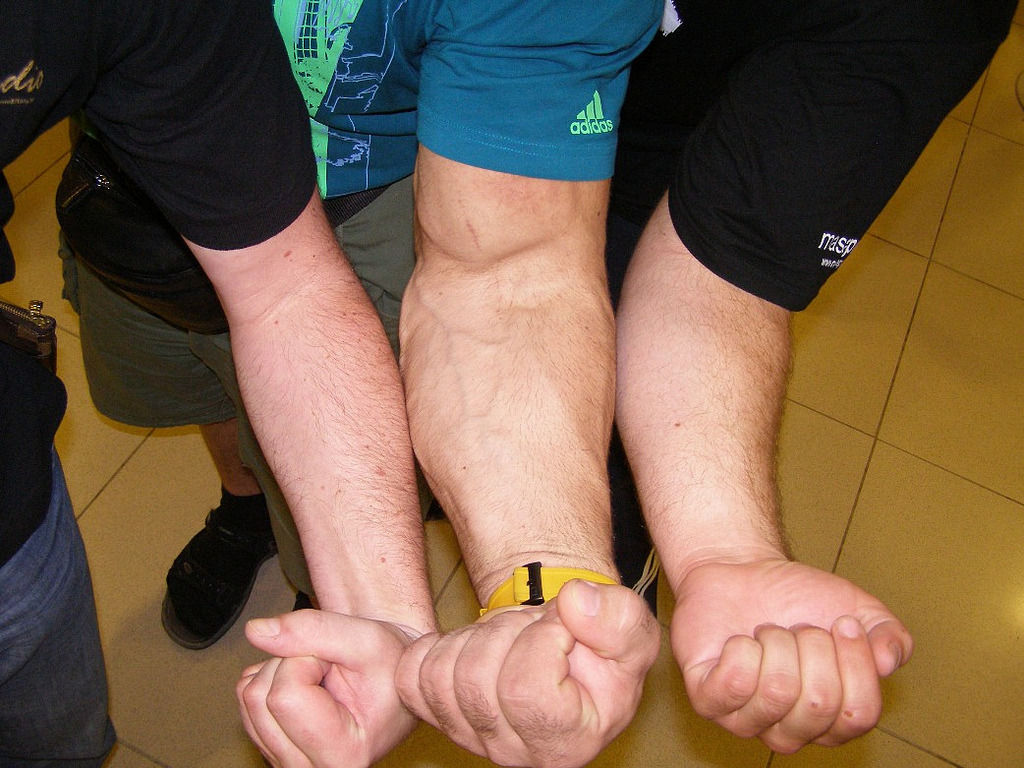 The garish, plastic wristwatch that protruded from Aaron’s scrawny forearm emitted an electronic buzz and all three of us felt an invisible force push our bodies into place; compelling us to stand side-by-side and squeeze our slim biceps into a bizarre synchronized flex.

It was just over an hour ago that I had finally regained my familiar (if lackluster) mass. So I couldn’t help feeling a bit depressed as I watched my arm shake rapidly. My gentle peaks thinning noticeably as the uncontrollable shakes grew stronger and stronger. Soon the rest of my body followed suit - muscles vibrating like crazy as they slowly wasted away.

I knew that Mikey would be feeling it the worst - his adorable face looked crestfallen as his feeble muscles trembled themselves into nothingness. It had only been a few hours ago when I caught him proudly fucking an insatiable fake-titted beauty right up against our fridge.

Growling triumphantly as he thrusted his titanic cock meat in her squelching pussy with all the might of his then Cena-like physique. Their intermingled excretions slopping out of the folds of her crotch and pooling messily onto the floor tiles.

I stared at his now stick-like figure. His face went red when he noticed me looking at him. Shit, he must really feel like shit now.

Aaron’s body was also quivering rapidly but, unlike Mikey and me, undergoing a far different and dramatic transformation. Slowly our collective brawn was seeping into his flesh. Swelling it. Hardening it. Infusing him with pure masculine power. His clothes creaked in protest as the goofy dork slowly juddered into an ultra-hot beefcake.

And then the transfer was done.

All three of us were released from our mystical bonds. Mikey and I dropped to the ground like dead weights, our weedy bodies sweating like crazy as we tried to regain our breath.

But Aaron stood tall, chuckling with his newly deepened voice, as he experimentally flexed the thick, beefy slabs that now armored his skeleton, He shot both of us a shit-eating grin.

After about five minutes of intense vein-riddled self-worship, the new big man on campus went to his room. No doubt eager to peel off the clothing shrink-wrapped around his meat-ridged body, and shower away the dank aroma of a lonely nerd who had spent most of the last 48 hours huddled over a PC playing Overwatch.

Within fifteen minutes, expensive cologne was being splashed generously onto his rugged skin. A stylish body-hugging shirt was being fetched from the wardrobe. Thick fingers were briskly gelling his geeky hairstyle into something more sensual. Aaron hadn’t had any pussy in the last 20 days and he was on the pull tonight.

And more importantly, finally getting some revenge.

You see, there was an annoying side effect of using the watch. Although it’s magic changed reality so that everyone besides us three now believes Aaron had always been a handsome slab of testosterone when it will be his turn to assume one of the “scarecrow” physiques, everyone will still remember his actions when he was a pussy slaying demigod.

Except now they would remember him as an 80lb weakling.

The girl that Mikey introduced earlier to fridge-humping Nirvana? Tonight she’ll be confused how a boney wimp with half her muscles was able to chat her up and then fuck her into double-digit orgasms. Never mind that the boyish-faced geek was scowling and grunting throughout and somehow, that had turned her on more.

Hence, Karen, the hot brunette Aaron has a huge crush on. The woman he lost his virginity to the first time he got “jacked” into a superstud. For ten days, he showed Karen all the tantric pleasures of dating a ripped-as-fuck, muscle beast.

Then the magic reset and it became my turn with the watch.

And Karen. Well, she became so embarrassed of her memories of being fucked into sexual ecstasy by a dorky, puny Aaron that she spent the last few weeks telling everyone that they never really dated, he was only her tutor and that she had agreed to receive free tuition if she pretended to be his girlfriend. She explained to her friends that she had caught “that dweeb” Aaron jacking off his little dick in her bathroom and she threw him out. No more tuition. No more pretending to be his girlfriend.

I could hear Aaron muttering as he left his room, twacking his massive meat cock against his Conanesque abs.

“Stupid bitch is going to beg me to pulverize her pussy tonight,” he murmured “And I’m going to do it in public, in front of all her friends. And their fucking cameras. Let’s see her explain why a nerd is causing her to scream with pleasure when her best friends have videos of me emptying my spunk in her ass.”

I suppose right now Karen is completely puzzled on why she just spent the last 3 weeks trying to convince everyone that the hottest stud in college was a perverted dweeb.

I hope she likes it rough - Aaron was in that sort of mood.

“Don’t wait up for me ladies,” bellowed Aaron with a grin as he cockily left the apartment, banging the door almost off its hinges with his vastly-improved strength.

I rolled my eyes. Aaron was insufferable when it was his turn.

I turned to Mikey, who had just sat down on the sofa. I was relieved to see the return of his friendly, boyish face again. When it’s his turn with the watch he tends to look really tough and uber-masculine. With a permanent scowl that screams “Don’t you dare speak to me, nerd”. A lot of the guys and girls love his ultra-badass look - especially once he started wearing leather jackets, boots, and jeans, but Aaron and I tend to avoid him when he’s gone all “Terminator”.

Okay, that’s a lie. I do like to “accidentally” walk into a room when the Terminator was entertaining a guest. As I said before, he actually likes it.

And his pretend, stony-faced scowls at me just made the situation hotter.

“So,” I smiled conspiratorily, as I settled down on the other end of the sofa. “It took me a while to clean up the mess by the fridge. Way to go, stud.”

Mikey looked at me like a frightened rabbit and his cheeks burned red. Damn. He’s always like this when he isn’t a furnace of bubbling, volatile testosterone. At least Aaron could be trusted to spend days rattling off his sexual conquests and boasting with pride about all the jocks he decided to fuck over - plenty of hot jack-off material to help me through my wait (and also give me some ideas of what to do when it was my turn)!

But getting Mikey to talk about his own adventures was like pulling teeth.

It looked like it’s going to be a long ten days.