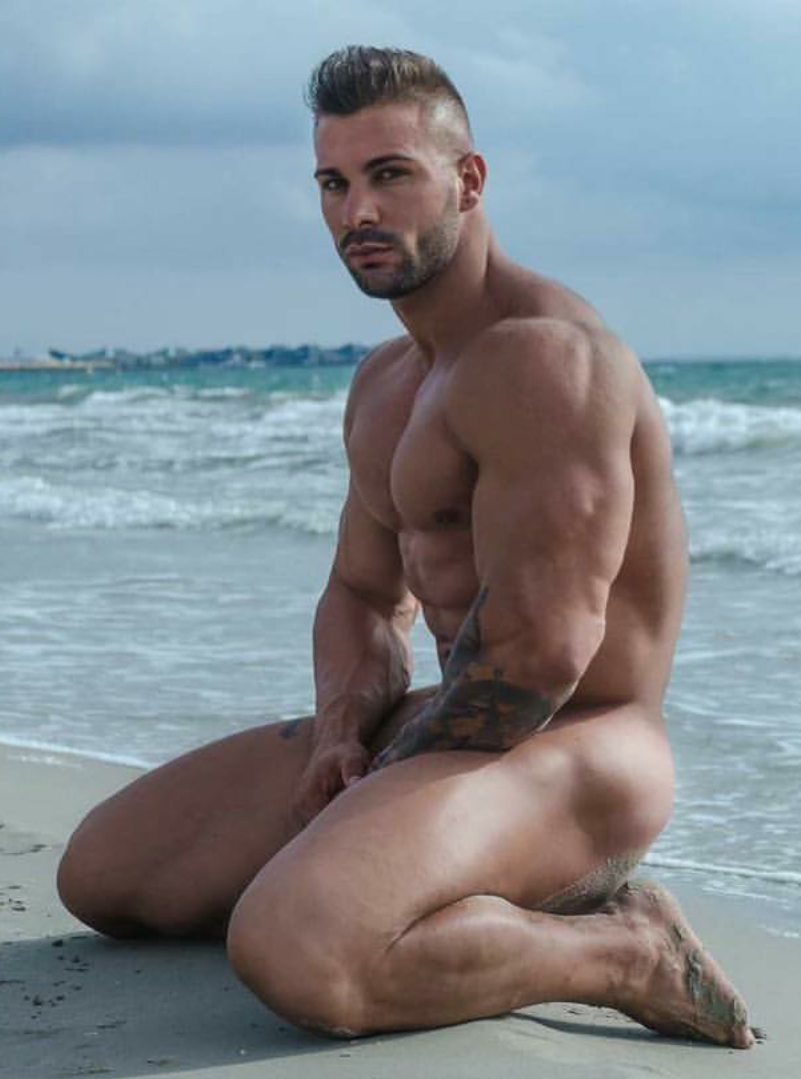 For weeks, Eric scoured the nearby islands, searching in vain for the shy, gangly youth who had rescued him from drowning.

And then _he _arrived into his life.

He had washed up onto the beach, assumingly a survivor from a shipwreck, nude as fuck and built like a brick shithouse.

His eyes sparkled with joy when he saw Eric approach him cautiously. The man immediately tried to stand up, but he stumbled badly - like a newly-birthed foal learning to balance on stick-like legs. Except there was nothing stick-like about this man’s legs - they were thick and bulging with powerful brawn. Eric couldn’t help thinking what it would be like being power-fucked with those massive thighs and ass.

The strange man seemed to be having thoughts of a similar nature. A jaw-breaking, 10″ cock swelled out from the muscled shelf that he would call his groin. The man looked down at his monstrosity with curiosity. Gently pawing at the blood-engorged babymaker, as if he had never seen a dick before.

After a minute, the muscular god seemed to realize what he was doing, his face blushing bright crimson while he tried to avoid Eric’s astonished gaze. For a moment Eric couldn’t help thinking of the shy youth who had saved him. Except there was nothing gangly or boyish about the man before him.

That’s when the strange man noticed Eric’s own dick was just as rock hard as his. His shyness was suddenly replaced with confidence. His massive cock twitched as he reached up with a brawny arm and easily forced a startled Eric onto his knees.

Then the musclebound seaman kissed the astonished young man; softly, tenderly, but with the slightest hint of a testosterone-powered dominance behind his actions.

His lips tasted of sea salt.

Eric started kissing back. Hungrily and passionately - thoughts of the elusive, skinny youth being swiftly abandoned for fantasies of this hot and sensuous muscle lord having his way with him.

For a second, Eric could have sworn he heard echoing shrieks coming from the distant ocean, of a woman screaming with rage and fury, and punctuated by an unearthly roll of thunder.

But soon all thoughts of the outside world faded away as his savage new lover firmly pushed Eric horizontally onto the wet sands with a mischievous but commanding grin.