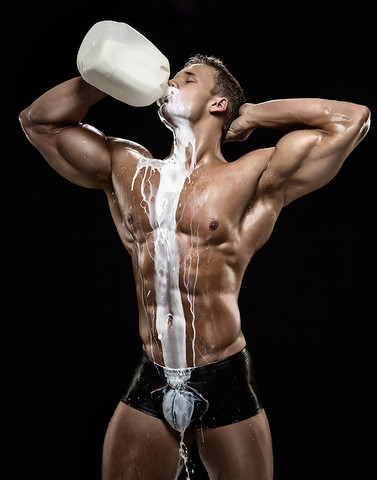 It took a long time for me to recognize the towering and skimpily dressed muscle stud standing in the centre of the darkened laboratory. But his eyes looked very familiar and, after a while, I could mentally replace the bronzed, rugged cheeks and heroic jawline in front of me with the more familiar trappings of acne, flab and a double-chin.

I had caught our would-be intruder finishing off a gallon of milk. Half-a-dozen similar plastic containers lay empty by his feet.

“Damn it, I really should have sneaked in tonight, when the lab would be empty,” grumbled the tanned muscle stud as he dropped the empty jug. “I guess I got too impatient. Oh, well.”

He shrugged his beefy shoulders ruefully and then proceeded to ignore me; his brawny arm instead reaching out for another gallon of milk from the industrial refrigerator. He didn’t even bother to twist the cap off — instead pulverizing it into plastic dust with a quick squeeze of his powerful fist.

I watched in astonishment as my formerly rotund friend rapidly downed the container’s contents; his greedy gulps causing his mouth to overflow with milk and spew down the sexy, hard definition lines of his hot torso… …right down to his imposing crotch.

“Holy shit!” I cried, finally realizing what was going on. “That’s all the milk that’s been contaminated with 10080-B! They’re all marked for incineration you idiot! We have no idea wha-“

My speech got interrupted by a massive hand squeezing my jaw shut.

“Now listen here, you puny worm” Warren growled menacingly. “I never agreed to incinerate them. Remember my hypothesis that the serum would be even more effective in this state? Seems to me that I’ve proved myself correct.”

“True, I wasn’t expecting to chug a few gallons of this stuff on Friday,” he continued. “But then again, I also wasn’t expecting to get dumped by Peter last Friday either. And knowing that I had been dumped for a gymnast with six-pack abs added more salt to the wound. Suddenly I was alone in this lab with all the motivation in the world to down an experimental muscle-growth mixture or poison myself in the process.”

“And now that I’ve spent the weekend banging the ass out of every gay fitness model in the city, I’ve decided to quit my job here. I just need to guzzle down a few more gallons of this ‘muscle milk’ and I can spend the rest of my days lounging around beaches and nightclubs as one of sexiest and, definitely beefiest, cover models on the planet.”

He walked the refrigerator again, retrieving two bulging plastic jars of the super-milk.

“If you have any damn sense at all Harry,” he said with a smirk. “You’ll be shoving a funnel down your throat and demanding me to pour the contents of this fridge into it.”

He offered me one of the bulky containers. The white, creamy liquid looked so inviting; the brawny arm holding it out to me a testament to the elixir that can transform wimpy lab technicians into beings of pure masculine power.

I never felt so mouth-watering thirsty in my life.

“C’mon man,” he urged. “Join me for a little drink and we’ll be driving to Venice Beach tomorrow as it’s unrivalled conquerors. Nothing to worry about for the rest of our lives but the occasional permanently damaged asshole when we accidentally go all out with our super-strength.”

He ripped the thick cap off and shoved the plastic container into my trembling hands. I threw back my head and poured the rich liquid down my parched throat.

I haven’t done one these in a while - my entry for @amalianetwork‘s weekly caption contest at: https://muscle-growth.org/topic/8556-weekly-challenge-28/_