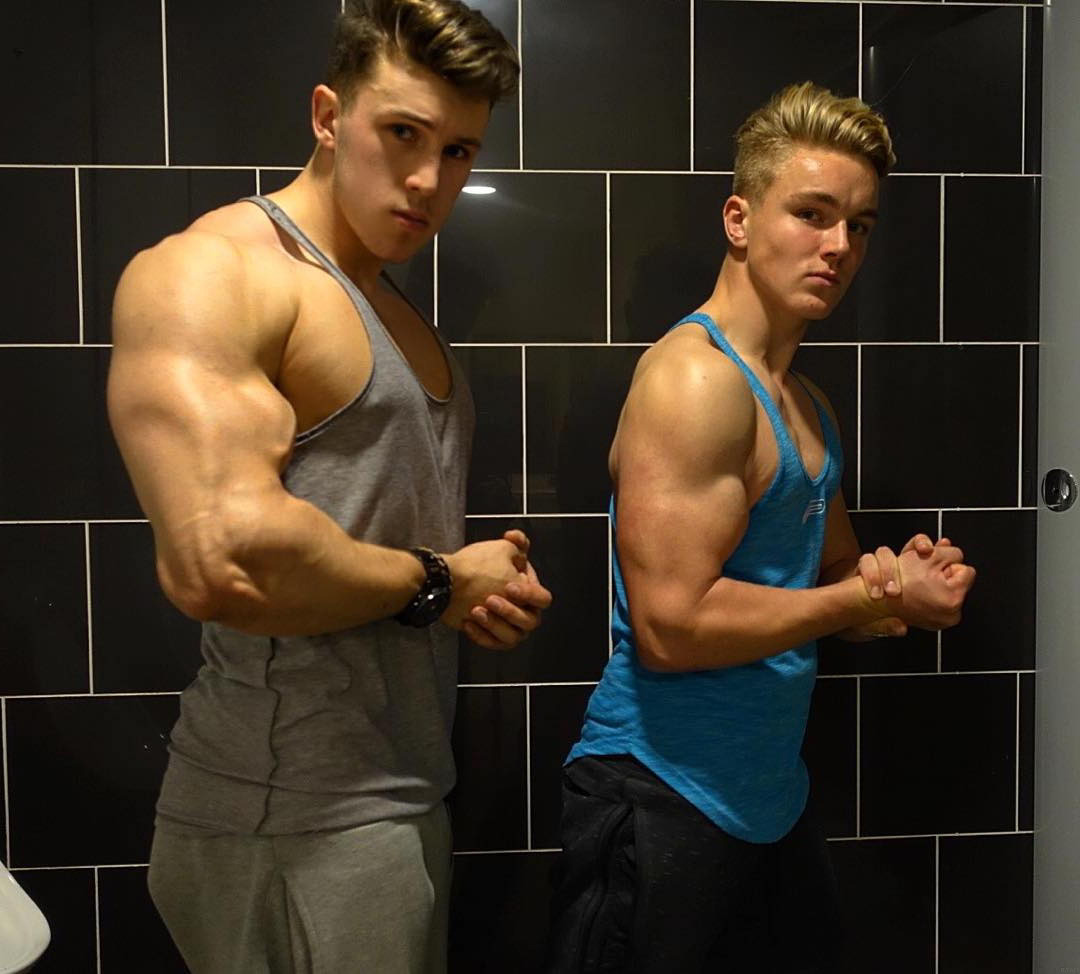 Johnny enjoyed these morning flexing sessions with Blake. Firstly Johnny simply loved watching his reflection get visibly more jacked every week - the last two years were a time-lapse of how the combined magic of puberty, weight training and nutritious food had culminated into transforming an average boy into a hot preppy, teenage jock who had scored with dozens of chicks. He was now so fucking hot that every night he spent hours getting horned up from lovingly caressing his own muscles before he finally went to sleep.

But whatever Johnny’s feelings about himself were, they were shot to the stratosphere while in the presence of the massive, bull-sized Blake. Every brawny inch of Blake was as if God had looked at Johnny and decided to create a Johnny 2.0 with colossal magnifications in size, strength and sexual magnetism.

Johnny had a nice teenage, fitness model chest; Blake had bigger chest measurements than most of the girls in school. Johnny had the occasional prominent vein; Blake had thick blood hoses bulging out of his skin. Jake had strong, bulbous shoulders; Blake had trouble walking through doorways without accidentally cracking door-frames with his bowling ball deltoids.

Even Blake’s face looked ten times more manlier and sexier than Johnny’s. He made Johnny look like an immature pipsqueak instead of the hot, muscular athlete that he was.

And the startling contrasts and similarities between Johnny and the muscle god drove both of them wild with lust.

Inevitably, these morning flex sessions would end with both muscle jocks aggressively tonguing each other’s tonsils while beating off their ballooning dicks with their muscular hands.

Unknown to Johnny, Blake himself had been a ninety pound runt until about 10 o’clock last night; when he copied Johnny’s stats to his Chronivac profile and simply moved a few of the stat sliders to the right.

Unknown to Blake, Johnny’s feelings of self-lust had also been copied over and accidentally boosted to the extreme.

Blake was initially taken aback by Johnny’s lustful glances at him - he hadn’t expected Johnny to be gay for him, especially since he didn’t change anything about Johnny’s personality in the Chronivac. But he soon took it in his new, manly stride. After all hadn’t he always dreamt of the hottest jock in school falling head-over-heels in love with him? It was just a stoke of luck that his transformation had awoken Johnny with similar feelings for him.