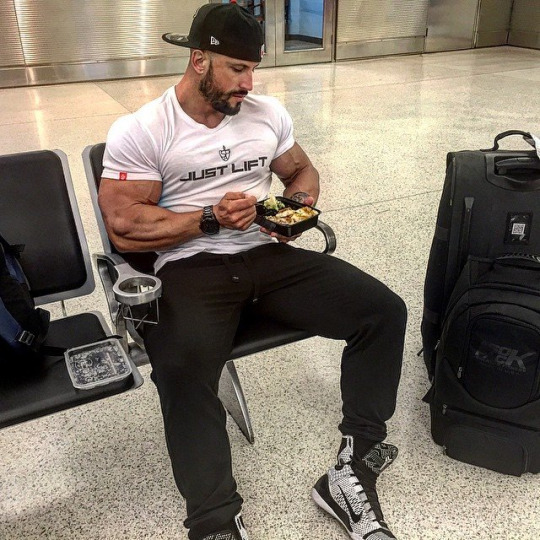 Simon stared at his fork again, repulsed at it’s unappetizing contents. It had been a long and arduous process but at long last he was on the verge of victory.

He shut his eyes and quickly devoured the pronged tidbit; trying his best to avoid it touching his taste buds and somehow hurl it at his throat.

Yuck! He winced hard, wanting to puke up the vile gunk. But he held steadfast - he was a man now. He needed to do this.

He really needed to learn how to eat his greens.

He paused suspiciously as he noticed a skinny little twerp staring at him in confusion.

“Looking at something?” Simon growled menacingly at the onlooker. He lowered his bulging hand over a metal armrest. There was a loud squeal of tortured metal and the teenager shakily found the magazine in his hands a hellava lot more engrossing.

Simon felt a glow of pride inside him. Fuck yeah, that felt awesome.

He looked down at his immense, pumped up physique with a shit-eating grin.

It had been all worth it. Even if it meant that he now had to force himself to eat healthily. The doctors had warned him that he could not retain all this mass if he still insisted on being a picky eater.

His parents had been confused about his decision to have a 24-hour stopover at this sleepy backwater. Simon had feigned interest in visiting a local science museum but what he had really lusted after were these beautiful babies. He flexed his softball-sized biceps in admiration. These crazy motherfuckers were only available to buy at a private clinic on the outskirts of this city and they were his tickets to starting college with a very big bang.

Shit, speak of the devils!

He quickly dived a gnarled forearm into his backpack and retrieved a crude-looking electronic device. He slipped it carefully into his mouth and then answered the phone.

“Hi Mom,” he said through the device.

Instead of the booming voice of God from a few minutes ago, his voice now had the grating tones of a high-pitched, hormonally-challenged teenager.

“Yeah, I’m at the airport waiting for the next connection. It shouldn’t be long now.”

He avoided the temptation to do a fist pump. God bless those geniuses at the clinic. The little gizmo did the trick as they had promised. His parents had no idea that their darling little boy was about to enter college with 24 inch biceps, an 8 inch dick and a plan to pound senseless the dripping pussies of every hot chick on campus. This toy was going to keep them off his back for the rest of the year.

Simon glanced over at the boy hopelessly pretending to have taken no notice of the extraordinary phone call.

The peculiar bodybuilder smirked as he reached into his backpack, grabbed a glossy brochure and handed it to the astonished teen.

“Look kid,” he said in his low growl. “Be a good boy at home, study hard, save all your pocket money and, with a little help from these guys, I promise that you’ll become the most popular bad boy at college.”

Simon walked off, carrying his overladen baggage with superhuman ease.

The kid carefully slid the promotional booklet in between the pages of his computer magazine.

His eyes poured over the incredible claims of the clinic’s doctors.

He scrutinized the astonishing before and after photographs with a hanged mouth.

He lapped up every syllable of every customer testimonial; each a twisted tale of a puny nerd swelling into a powerful, sex-crazy man-beast.

By the time his parents had arrived, he was desperately trying to hide a raging boner.

By the time their boarding was announced, he was asking his dad for advice on how to get a part-time job.

Another entry for the weekly contest. See: https://muscle-growth.org/topic/6404-weekly-challenge-2/