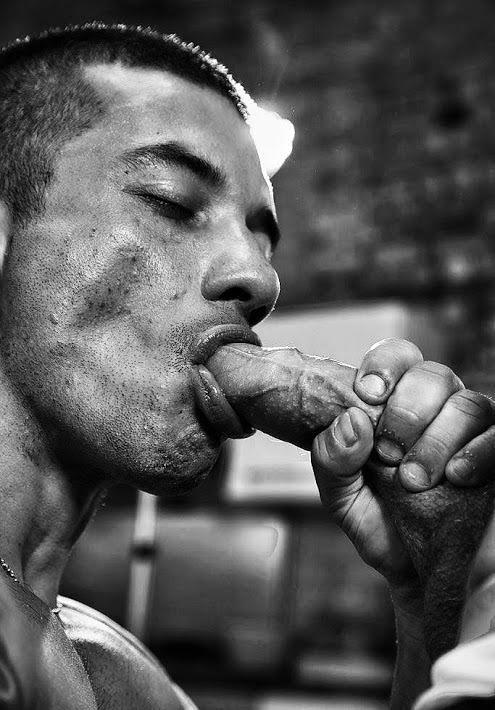 It was the backflip kick that finally sent The Almighty Chad crashing to the ground. It was surprising the effectiveness of 280 pounds of prime-grade beef being rocketed at full force to a man’s face.

Chad’s gargantuan, Schwarzenegger-proportioned body teetered over like the felling of an ancient sequoia.

He lay there, moaning incoherently as his exposed cock trashed around like an excited eel, spilling slick precum over the hard canvas. These men’s cocks were all the same; these titans of power really got off on any display of brutish dominance, especially to themselves.

The Pulverizer cut straight to the chase. He violently dragged his sluggish opponent to a corner, propped him up against the hard padding with his own powerful set of freakishly-striated muscles and then proceeded to devour the throbbing man meat before him with hungry relish.

He was also bequeathing the frenzied crowd a spectacle to long remember. Most WUW superstuds prefer to subjugate their opponents with harsh ass-destroying fucks or by choking their rivals’ cavernous esophaguses with their grossly-oversized baby makers. Rarely does the audience get to see a ruggedly-handsome muscle warrior willingly gorge himself on succulent dick flesh. They obviously never get to see what happens inside the locker rooms.

The Pulverizer was determined that no one in the crowd would get any sleep tonight. He wanted their dicks to be rubbed raw as they fantasize over his hot, steely face manhandling their own meager equipment with the same expression of arrogant contempt.

He will definitely be picking up a shit load of new, eager clients after this match.

The Pulverizer looked up at his victim’s dazed face in pity. The Almighty Chad was a crowd favorite; an unstoppable brutal mass of power with a beautiful pulsating cock that sent his opponents either into intensive care or into an uncontrollable drooling lust. This should have been an easy match for him - The Pulverizer was just one of the many untested up-an-comers that had recently signed on.

However only the Pulverizer knew Chad’s big mistake. He was one of the few confidants who knew The Almighty Chad in his “unjacked” form. In fact it was Chad who recruited the one time wimp into WUW.

The Almighty Chad was one of the few professionals in the game who still maintained his original identity. Once the income came rolling in, most WUW stars simply abandoned their old lives, but it seemed that a world-renowned research scientist can’t simple drop off the face of the Earth.

It turned out that Chad, or to be more precise the ever-puny Dr Simon Cooper, had been busy running an international chemistry conference over the last week. Fuck, no wonder Chad had been a complete pushover - the anxieties of organizing a prestigious academic event, the week-long forced abstention from jacking himself into The Almighty Chad… …all that can seriously really mess up his hormones during his next jacking. To be blunt, this weekend Simon had accidentally jacked himself into a musclebound pussy-boy, instead of the hard-as-nails force of nature he usually became.

The Pulverizer felt a heavy surge of testosterone reenergize his body. Fuck, he was a man now, not a sympathetic little wimp. The oversized pussy was simply getting what he asked for. What a fucking idiotic jerkwad!

He doubled down on the task at hand, deliberately and carefully suckling on the bigger man’s ultra-sensitive glans.

Finally, he felt the first stirrings of release within the throbbing flesh.

The triumphant Pulverizer plopped out the oversized cock head from his salivating mouth and the Almighty Chad roared with unbridled euphoria.

The final bell rang out.

It was all over. The Almighty Chad had just been unmistakably used, abused and ultimately humiliated.