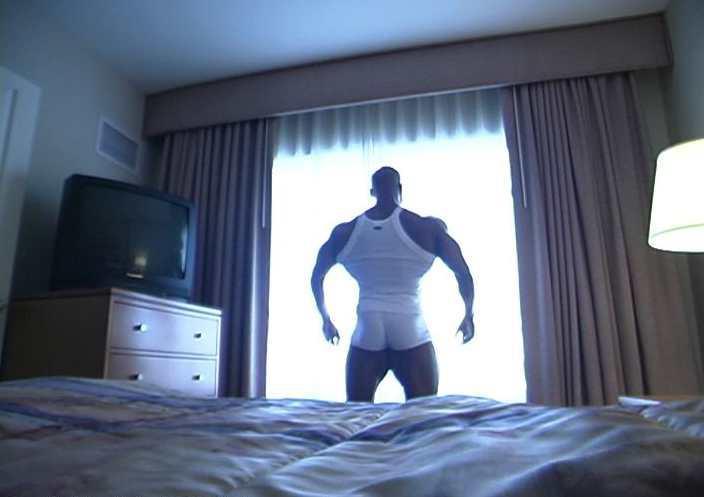 The muscular colossus stood by the hotel window, watching with pride as a befuddled figure navigated the parking lot outside with slow, painful limps. The grinning brute’s immense monstrosity of a cock was still oozing a bountiful cream of precum; the rich fluid had completely saturated the fabric of his heavily-strained underwear and it occasionally slopped onto the carpet in thick, sticky clumps.

He expelled a massive volley of air through his nose as he turned his armored back to the window and deliberately exploded his arms into a freakish display of gnarled flesh and distorted veins.

“Yet another satisfied fan, boys,” he boasted, as he caressed his tremendous biceps with a reverential tongue bath.

He followed his lewd, slurping display in a nearby mirror; a sight so erotically masculine that he quickly brought himself to ecstasy. His cock discharged a copious spew of man juice over his sick-as-fuck abs and he flexed his mighty form into a victorious most muscular.

Fuck, it felt damn good to be a man.

Not bad, he surmised, enough to get by for another few days. The machine’s rental and fuel costs were exorbitant.

But he needed much more in order to make a decent living out of this. He needed to attract a larger fan base - in particular the deviant dorks with really deep pockets and really twisted sex fantasies. It didn’t fucking help that it took weeks for those little faggots to recover after a short one-to-one session with him. Perhaps he shouldn’t be fucking them so brutally, but shit - isn’t savagely fucking their slender little assholes the kinda magic that brought in the big bucks? Isn’t that what WUW is all about? The dream he signed up for?

He dragged a dorky-looking backpack from out of the wardrobe and trundled over to the en suite with a grim expression on his face.

The rumbling of a small engine could be heard spluttering to life. Gradually, the noise mellowed into what sounded like the electric whine of a high-speed fan. Then a massive cloud of magenta colored powder mushroomed out of the restroom door with a deafening roar before suddenly vaporizing into harmless ozone. The engine whirled down to a dead stop.

After a few minutes, there was a sound of a toilet flushing. This was followed quickly by the diligent sounds of toothbrushing and mouth gargling.

A gangly young man stepped out of the door, wearing an ill-fitting coffee shop uniform and carrying a familiar-looking backpack on a boney shoulder. The name “Elijah” was written in big, friendly letters on a helpful card pinned to his pigeon chest.

He embarrassingly stuffed a gargantuan pair of gooey underwear into the backpack’s back pocket and casually walked out of the hotel room. He whistled an innocuous little tune to himself, trying to lighten up his mood.

But fuck, what he would give to become a full-time professional underground sex wrestler.