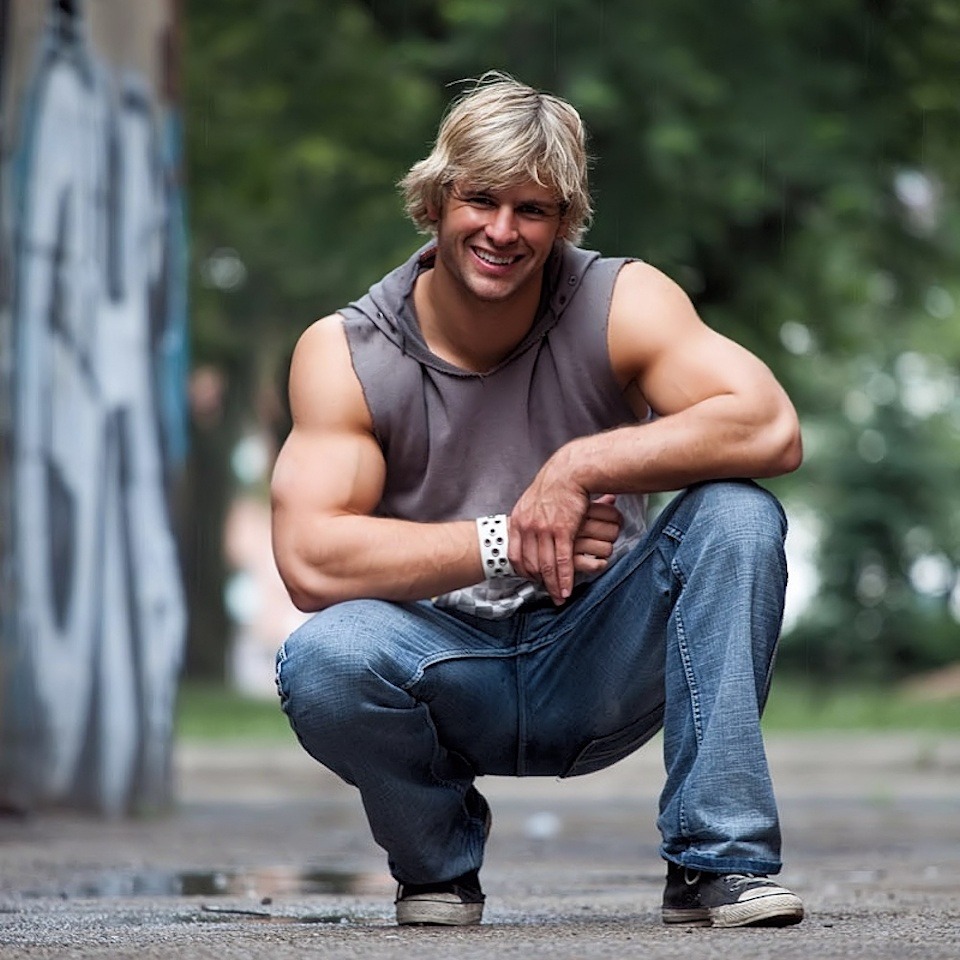 “Did little Tommy get himself lost?” said the stranger in a rather patronizing tone. The man’s beautiful hunky body was haunched close to the ground in order to make him eye-level to the child standing before him.

Tom attempted one of his usual insulting put-downs but he couldn’t move his lips. Instead, he found himself nodding his head shyly at the smiling man! Tears were streaming down his face.

What the fuck? raged Tom from inside his mind. I was in my bed a second ago! Where’s Trish?

“There, there,” said the handsome man soothingly as he patted the skinny little boy with a perfectly-muscled arm. “It’s alright. I know where your mother lives. Why don’t I take you to her?”

He held out a meaty hand with an encouraging smile, enticing the frightened child to hold onto it.

What the hell is going on here? screamed Tom to himself. Why do I have this kid’s body? Why can’t I fucking control this body?

“Do you know where I’ve just come from little Tommy?” asked the man pleasantly, in an attempt to strike up a conversation.

The little boy shook his head.

“I’ve just come back from fucking the living shit out of your girlfriend. Quite literally too.”

The man stooped down and whispered into the smiling child’s ear. “You see, the slut really likes to take it up the ass!”

The boy giggled as if the man had just made a playful farting sound in his ear.

But inside, Tom was fucking livid. What the fuck was going on here? Who was this guy?

“Of course, in this reality Trish isn’t your girlfriend,” explained the man. “Actually she’s Harry’s girl these days. Though she obviously doesn’t mind offering her body to a hot fucking stud like me.”

Harry? My best friend? Has this jerkward really fucked Trish?!

“Neither of them have ever heard of you, you know. You’re just a shy, little kid now - not the steroid-popping dickwad they used to know.”

The man stared directly into the little boys eye with a shrewd and calculating look. He gave a cruel smirk.

“Yeah, Tommy,” he explained with glee in his voice. “I know what’s going on. You may look like an innocent little angel right now but I know that the real you is in there somewhere - raging at the world but only hearing the echoes of your own dumb-ass voice. I’ve basically cut off your balls, you little dipshit. You are never going to fuck over anyone else ever again.”

He continued their slow walk.

“You see Tommy, I’ve been messing about with your existence in this reality. You are no longer the son of Winston Buckwell, famed bodybuilder and gym owner. Your mother never met him in this reality. Instead you are the son of Lawrence Pendergast, a 5’ 1” timid banker with a scrawny ectomorphic physique, an extremely high metabolism and bad skin.”

“I’ve made sure that you inherited most of your physical qualities from Mr Pendergast,” boasted the man.

“Not that your mother actually knows who your new father is. Let’s just say that he was one of her many anonymous clients.”

The man gave the wide-eyed child a seedy little nudge.

Huh? What was he trying to say?

“Oh come on, Tommy! You think a dweeb like Lawrence would be able to chat up a woman? The little fucker has to pay for sex!”

The man grinned evilly at the kid, letting the news sink in to the raging brute inside.

“That’s right, Tommy! I’m made you a son of a whore! How many times have you called me that?”

Tom felt himself seethe. The little boy started singing to himself.

“Ha! I bet you still don’t know who I am! Am I right? You’ve pretty much called everyone ‘a son of a whore’. It’s practically your catch phrase!”

The man burst out laughing.

“Oh, that fucking kills me! Actually, I find it rather enjoyable that you don’t know who I am. I was all ready to reveal which one of the pathetic nerds I was that you fucked up in your old life. But now that I think about it, it’s more fun keeping you in the dark.”

“The only hint that I’ll give you was that I was definitely not this hot and sexily muscled in our old timeline,” said the man as he flexing a bulging bicep admiringly.

“Oh, here we are!” exclaimed the man as they approached a ratty old apartment complex. A tired-out woman in her thirties was searching around the compound grounds frantically.

“Good morning, Miss Green!” called out the man with a friendly wave. “I found your son looking a little lost just around the block.”

“Thank God!” cried out the woman as she dashed over to her son. “Tommy! You had me so worried!”

She hugged her precious bundle of joy, drying her tears in his hair.

“Thank you ever so much sir-“ she began as she turned towards her son’s rescuer. She let out a little gasp as she suddenly realized how stunning he looked.

The man grinned back.

“Er, I don’t have much,” she said sheepishly. “But if there is anything I can do-“

“Well,” replied the stranger as he gentled caressed her tear-stained face. “There is one thing you could do.”

He carefully grasped one her trembling hands and gently guided it to the rapidly hardening bulge at his crotch.

Her eyes widened. She had not caught herself a cocky alpha stud like this since her early twenties. It was so fucking tempting.

“I’m sorry sir,” she apologized. “It’s a one room apartment and there’s no one around to look after little Tommy. He’ll be practically watching us do it.”

The man smiled warmly at her, relaxing her fears.

“Don’t worry. That sounds just perfect,” he replied as finally went in for the kiss.

As he playfully wrestled her tongue into submission, he secretly raised two fingers up to the lovely young boy laughing by her side.