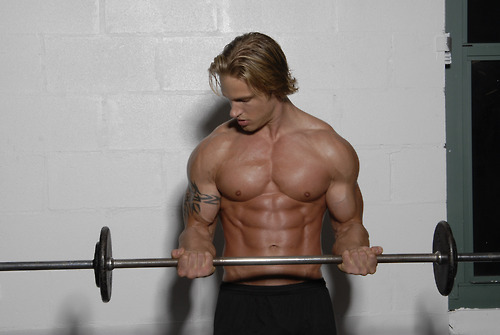 Hes Not Here To Work Out

He’s not here to work out.

Thanks to the formula, Zach does not even need to go to the gym. But he does go there once a day like clockwork.

Only for fifteen minutes mind you, just enough time to build up a decent pump.

Thanks to the formula, he just needs a tiny amount of weight to transform his immaculate muscles into a masterpiece of freakily-veined boulders.

Thanks to the formula, he retains that pump for a glorious fourteen hours.

Fifteen minutes was also just enough time to get the other gym-goers seething with rage and jealousy. They know damn well that the super-hot, shredded cover model with the perfect symmetry, dazzling smile and boyish good looks never fucking works out.

Or, thanks to the formula, bother to eat healthily. Zach purposely enters the gym each day eating a pack of Doritos while finishing off a bottle of beer. Just so he can get a rise out of his fellow gym-goers.

But they say nothing. They already know just how powerful Zach really is. No need for another demonstration. The audience from last month’s demonstration are still in intensive care.

When his body is fully pumped, it’s time to smirk at the imperfect, genetically-inferior weaklings around him and head downtown to the gay clubs.

In the recent past, the old Zachary would have been scared shitless to even enter a bar. The thought of even approaching a guy would send him into a flurry of panic attacks. He did manage to attend a few LGBT meetings at college and while he did share the sense of camaraderie within the group, he was far too shy to reach out to anyone he was attracted to.

For example, for months he had been harboring a huge crush on a young man called Joey who seemed to just as big as a loner as he was. Zachary never even attempted to speak to him.

The new Zach would never bother to speak to a dork like Joey.

The new Zach only goes to the most outrageous sex-fuelled parties in the city, dancing seductively in a sea of tanned muscle and skin-tight lycra and leather.

He’ll have his body worshipped by the hottest, sexiest studs in the city.

He’ll have his cock licked and devoured by the most beautiful and sensual cock-suckers on the planet.

Then it’s back to his bachelor pad with his entourage of hand-picked muscle studs for some personal playtime. Thanks to the formula, he’ll spend hours showing just how puny they all are compared to him. How a simple squeeze of his little finger could break a man in two. Soon he will force them to debase themselves in front of him, cowering before his magnificence while he slowly strokes his massive cock to earth-shattering orgasm.

He’s not here to work out.

He’s not here to be a superhero, though he could if he cared.

The most powerful being on Earth is just here to get his rocks off and humanity will soon become his spent pack of tissues.