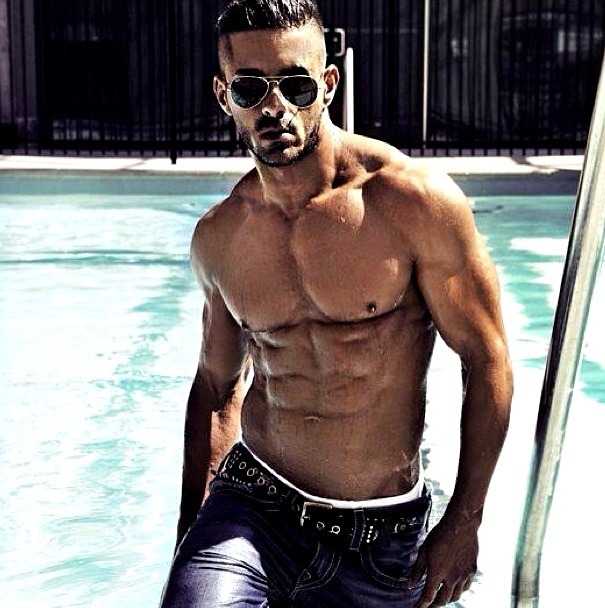 Christian had just about settled his broad upper back on the fence again when he suddenly heard a commotion coming from the swimming pool across the street.

He looked over to see what appeared to be a professional male fitness model step out of a pool. Water gushed down the deep cuts of his thick, ripped torso while a drenched pair of designer tight jeans hugged his brawny legs to perfection. The crowds at the swimming pool were looking at the spectacular vision of male virility with either envy and lust.

Fucking showoff, thought Christian with a cheeky smile. No doubt the cocky stud was about to put his best moves on one of the hotties currently gaping at him.

Christian was very proud of how Lewis turned out, though it had been the most round-about way to be introduced to a new client.

He may be a dealer of bodybuilding drugs, but that didn’t mean Christian was an illiterate thug. He was actually very intelligent, maintaining high grades throughout school and obtaining a degree in Computer Science. Knowing this, his next-door neighbors had recently asked him to help their son.

Lewis was failing abysmally in most of his subjects in high school and the boy needed to do a complete u-turn with his grades soon or face repeating the year.

Christian was only too happy to help the boy and he was immediately hired to grind Lewis over the next few months. So Lewis, an underdeveloped little runt of a teenager, was soon reporting every evening to Christian’s house where Christian helped him revise.

Lewis did progress in his studies, but at a very slow pace and it soon dawned on Christian that it would be an impossible task for Lewis to catch up with the rest of his class in time. Drastic actions were required.

Christian figured that Lewis did have an intelligent mind but he deliberately hid it at school because he was being bullied over his laughable puny body. He was too nervous to stick his neck out at class and he tried his best to avoid learning as much as possible.

Christian felt really bad for the kid. He was in his senior year, but in reality had a body comparable to a weak 12-year-old. Yeah, chemical assistance was definitely needed here. Thankfully Lewis’ parents paid very well for the grinds so Christian could afford to purchase a simple masculinity boosting cycle.

However he needed to add a little something extra: a very strong dose of Alpha-Musk. This was a powerful drug that heightened attractiveness to the opposite sex - a useful weapon to have on hand in order to negotiate the complex social pitfalls of high school.

Lewis needed very little convincing to take the drug. Christian simply handed the boy a “before and after” photo album he kept of his former clients. Lewis kept the album overnight, to study Christian’s former cases with close scrutiny. There was little doubt in Christian’s mind that Lewis’ puny little dick had been jerked off raw during the night he had the album. Anyway, he agreed to go on the cycle, as if the puny wuss was ever contemplating saying no to a no-risk proposition guaranteed to transform him into a manly hunk.

For the first week of the cycle, Christian and Lewis spent their evenings sitting on their butts playing computer games and munching on pizza while they pretended to work on grinds. The super-steroids were working like clockwork, Christian could see Lewis’ glee as he noticed his thin flabby flesh gradually thicken and harden over the next few days.

Soon Lewis’ grade problems were a thing of the past. He wasn’t afraid any more to speak up and participate in class, but more importantly he was spending long evenings fucking his lust-filled teachers in exchange for higher grades.

His parents were of course delighted at their academically-improved son, but they were slightly shocked that their cute their little boy had suddenly underwent the sexiest growth spurt in living memory and was now a walking sexual fantasy with a permanent and very prominent hard-on.

They initially forbade Lewis from bringing girls into his bedroom overnight but they soon relented to their little boy’s new and very demanding sexual urges. It was hard to say no to a man who was far more stronger, charming, sexier and superior than you could ever hope to be.

His high school soon experienced a sharp rise of teenage pregnancies. Only Lewis and Christian knew that all the pregnant girls happened to be girls who had ridiculed Lewis back when he was scrawny nobody.

Lewis didn’t fear any repercussions from the girls or their parents. He had secret recordings made of each girl not accepting no for an answer when he explained to each of them that he hadn’t any condoms with him. From the videos, it’s obvious that they practically raped him out of their sheer lust to be fucked by the handsome adonis’ horse cock. He also kept recordings of each girl proudly admitting to him she wanted to keep the baby in order to blackmail him into settling down and raising a family with her.

Yeah, Lewis had become a really sick and twisted bastard when he learned how to abuse his chemically-induced pheromones for petty revenge.

And they had called him a slow learner!