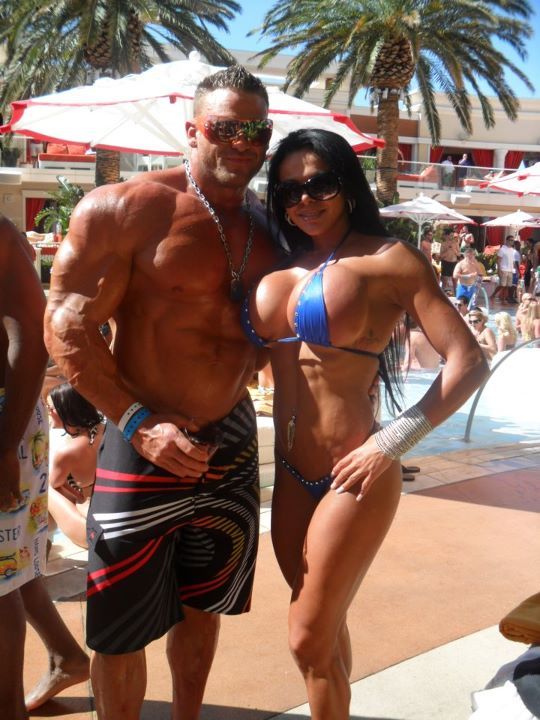 Christian smirked when he saw a familiar sight across the street.

A hulking 6’ 5” man was sauntering confidently among the crowds at the nearby swimming pool and bathing area, his enormous beefy arm clutching a smoking-hot latino beauty tightly to his side.

His enormous thickly-veined biceps would have completely dwarfed the woman’s torso, if it hadn’t been for her own set of prominent trophies - a pair of bolt-ons shaped like volleyballs; her nipples barely covered by her shameless dental-floss bikini.

It was Tony LaRocca; parading his latest conquest for all the world to gawk at. He notoriously liked his girls to look like complete sluts and his latest catch certainly fitted that bill. No doubt he spent most of last night groping and squeezing those silicon fun-bags with his gargantuan paws as he pounded her pussy raw with his iron-like cock.

The girl was all smiles; obviously very pleased at landing herself such an incredible specimen of a man. She was walking in wincing steps, as if she had just completed an intense powerlifting session in the gym. The only thing preventing her from completely tripping up was the bracing steel-like arm of her gorilla-sized chaperone.

It was obvious that her lithe body had yet to adjust to the size of Tony’s supersized baby-maker and the sheer intensity of his lovemaking.

Tony had been one of Christian’s very first customers - four years ago a blubbery sack of fat, acne and diabetes, who spent most of his days whacking off his stubby little dick to some really-fucked up fetish sites on the internet.

They usually did what he asked too, no matter how kinky or debauched the sex got.

Tony discreetly gave Christian a thumbs up as the couple walked past; momentarily dropping his “proud boyfriend” mask to flash his trusted dealer a perverted grin.