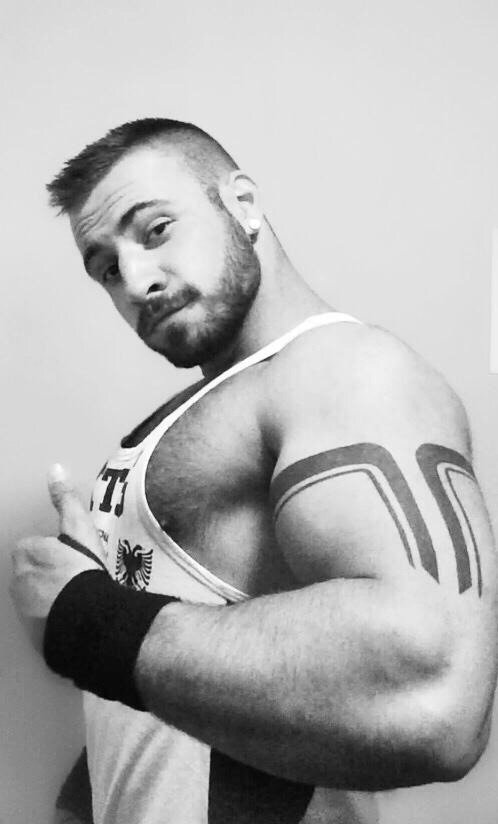 I looked at my roommate in awe. He now towered over me in height and muscle and there was some new aura radiating out him, an air of manliness and superiority.

The Shaun that I knew hadn’t been able to grow a wisp of hair on his chin during his stay at college. Now his new body was covered by a coating of fur and bristle that just screamed sexiness and virility.

He smirked at my reaction, and started to tease me by slowly relaxing and inflating a powerful-looking and extremely hairy bicep.

“What on earth happened to you?” I finally interjected.

“Let’s just say that I finally received my inheritance,” he said with a newly deepened voice. “Thank fuck!”

“My old man’s a werewolf,” he explained casually, as he carefully raised his wifebeater to inspect the masculine wall of cobblestones underneath. “But he wouldn’t turn me until he deemed me old enough to be wise and responsible and shit. Seems that spending one year in college was enough to meet his requirements.”

“Do you know how tough it was going through puberty as a short, butterball geek knowing that at any time my Pops could turn me into a hunky specimen of an alpha male?” he muttered in frustration, indadvertedly releasing a primal growl from his throat.

The hairs on the back of my neck rose, I had never seen Shaun so angry.

“But no, I had to endure a lifetime of ridicule and scorn so that I could learn to be ‘humble’ before I received the gift. Stubborn old bastard - he watched me come home with broken glasses, black eyes and bruises, while he was getting his over-inflated rocks serviced everyday by his pack’s hottest bitches.”

My newly-masculinised roommate began to grope at his own impressive bulge crudely.

“Yeah,” he said, as he winked to me like a kid who had just found the key to a toyshop. “Now I’ve finally got myself everything I need to make myself the big man on campus. What chick is going to turn down this handsome stud and his 10 inch cock?”

“Especially since I haven’t smelt another alpha-wolf in the vicinity. Every hot bitch will be mine for the taking.”

He raised an eyebrow conspiringly.

“You know man, I have been thinking of forming my own pack right here and now. Just me and you. Did you ever want to know what it feels like to have a werewolf bachelor’s pad?”

Oh fuck, that sounds so hot. The two of us parading around campus as super-cocky hairy studs.

“But first, you have to earn the honor of joining my pack.”

My hopeful fantasies were quickly dashed as Shaun flopped his gargantuan monstrosity of a cock out of his too-tight briefs.

“You see, “ he explained with an evil grin. “There only gets to be one alpha male in a pack and I need to ensure that you are subservient enough never to challenge me. So you need to demonstrate to me that you are willing to do what you’re told, no matter how much it repulses you.”

“Come on, stop gaping at it you dork! Do do you truly want to be a super-hot pussy-slayer this time next month, or do want to spend the rest of the year jerking-off your tiny nub of a dick while listening to me fuck the shit out of every sexy chick on campus? This is a once-in-a-lifetime opportunity just staring at your face.”

I sighed. I carefully encircled his enormous shaft with my weakling hands and begin carefully licking the immense mushroom head with my tongue, all the while gazing adoringly at my new master.