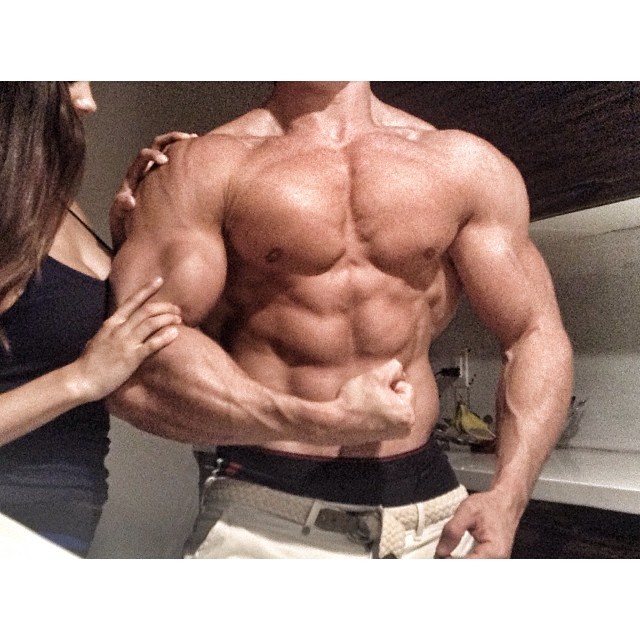 While You Were Gone Part 2

James stomped down the hallway in fury. The situation had become unbearable after his “best friends” had stolen his batch of Biomorph super-hormones. Their apartment had become some kind of twisted porn fantasy of a bachelor’s pad. His once dorky roommates were now meathead douchbags; spending their days hunting for pussy (or in Chad’s case, skinny little twinks), hauling their prey home and impaling their conquests with their massive cocks while howling bellows of victory to each other. James finally had to move out - he just could not get along with their new super-jock personalities. Besides, he was still hurt that his so-called friends had swiped the expensive hormones from him.

Still, even though they were now a bunch of pricks, he burned hot with envy. His stubby little dick couldn’t help growing to it’s pathetic “full mast” whenever he witnessed one of his perfect-bodied roommates walk confidently around the apartment with a thick, a lewd bulge running halfway down his leg and a fake-titted beauty held closely in the protective embrace of a sinew-rippling arm.

Damn it! Life was so unfair. James should be the one swamped in pussy and tits while his friends should be jacking off their puny little dicks to his Herculean physique and superhuman pussy-slaying skills!

But things were on the up. It has been three months since the incident and he had finally managed to scrape together enough cash to pay for another shipment of the super hormone. This time he was taking no chances - Alan, the shy and nervous bookworm he was now sharing a room with, will never accidentally stumble upon a package that would promise him a free pass into a pantheon of muscle gods.

No, this time he sensibly arranged to have the package delivered directly to his workplace.

Unfortunately there was a minor snag in his plan - the package was taking fucking forever to get to him!

After waiting four weeks, he finally e-mailed his supplier. It turned out that the package had already been signed for well over a week ago! The slackers in the mail room had obviously signed for it, placed it on one their umpteen shelves and then had completely forgotten all about it!

So James was now heading directly to the mail room in a foul mood. He was all set to retrieve his package but not before he gets the chance to unload a rant about the abysmal service from the company’s mail room

He entered the mail room and gaped at the sight in front of him.

Behind the desk stood an amazing specimen of a man. He stood shirtless, proudly presenting the mouth-watering physique of a competition-ready fitness model to a giggling hot girl by his side. The girl was shamelessly feeling up every hard ridge that he flexed to her; delicately tracing his thick-cabled veins with a teasing finger.

James gave a quick cough, interrupting the impromptu mating ritual. The stud finally realized he had a customer and put a stop to his sexy flexing routine, shooing away his giggling admirer with a playful but forceful slap to her sexy rump. She left the room with a dreamy expression on her face. There was no doubt that this meathead was going to nail her later that day.

James walked to the front desk, preparing to rattle off his prepared rant to the gorgeous hunk in front of him. He suddenly realized that, with the absence of the girl’s high pitched giggles, there was also another sound in the room. A sound he had become familiar with during his final few weeks with his former friends.

He squinted behind the multitude of shelves standing behind the grinning meathead in front of him. He could just about see another woman, her back to him, kneeling on the ground. Her head was bobbing up and down, worshipping what seemed to be a massive 9-inch cock with familiar rhythmic slurping sounds. A freakishly-thick muscular forearm was moving about in the shadows, it’s manly hand guiding her head up and down his insane-looking fuck tool.

James felt a similar feel of despair at the pit of his stomach. He knew damn well what was going on.

“You fucking bastards! You opened my package!” he accused.

“Ah,” replied the smirking hunk in front of him. “You must be James. I was wondering if you would show up.”

“You deliberately opened my package, you fucker!” yelled James in a rage. “You stole the formula and injected you and your buddy with it. You are so dead!”

“So what are you going to do about it?” said the musclebound deskman, crossing his intimidating, beefy arms with an evil grin. “Beat us up? I’ld like to see a shrimp like you try!”

“Don’t be stupid, I’ll just report what you did you to your superior!”

“Hell, Ms Musgrave was just visiting to tell us that we are to be promoted as ’special advisers’ to the board. Tomorrow, Sam and I will have our own offices on the top floor, with six-figure salaries and lots of wealthy chicks and faggots at close hand to worship our smoking-hot bods.”

“So, do you really think a little nobody like you can get our asses fired?”

All of James’ fury fled, his anger replaced by a sense of hopelessness. He had been beaten to the punch yet again.

The hunk at the front desk looked guiltily as the depressed young man started to cry.

“Look kid,” he said with a kind smile “I admit that since taking those hormones, we’ve been acting like a pair of cock-swinging douchbags. But we are not complete jerks. There were three doses of the stuff and we only used up two. So, you’ll get you chance to have some fun.”

“Really?” said James in surprise. “You actually left some for me?”

“Sure kid, but we didn’t want you to find out that we stole the hormones, so we repackaged the remaining drug and mailed it to your home. We even managed to make it look like an official Biomorph package too. We were hoping it would be passed off as a mailing mistake, you know - your supplier accidentally posting it to your billing address instead of your workplace and getting the dosages wrong. By my reckoning it should have arrived this morning.”

“This morning?” said James, his heart suddenly pounding with fear. “But Alan has been at home all day - he’s supposed to be studying. If he sees those Biomorph logos… oh fuck!”

His phone suddenly vibrated. He flipped it open.

An image popped onto the screen of the muscular veiny forearm of a bodybuilding Adonis, the meaty hand grasping a jizz-coated and unbelievably thick cock.

His phone started vibrating again - Alan was calling him.

With a sinking feeling, James answered.

“When are you coming home, pretty boy?”  drawled a deep and powerful voice that just oozed of testosterone and cockiness. “Your shy little roommate has just taken the ultimate anti-anxiety drug and really wants to introduce you to the new him.”