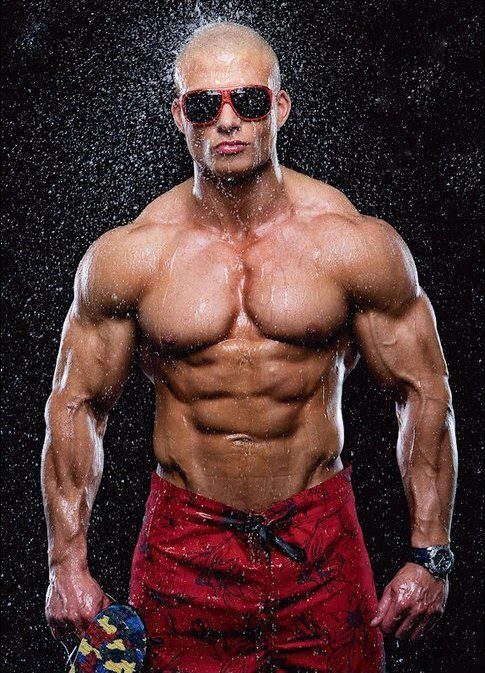 The camera focuses on a short and scrawny young man. He is shirtless, exposing an embarrassing pigeon chest with a prominent boney ribcage. An oversized-pair of beach shorts hang precariously around his waist. He smiles shyly to the camera.

“I-I’ve been challenged to do the Victims of Bullying Transmutation Chemical Bucket Challenge by my old friend Larry Woodhouse.”

“This video is to help raise awareness that there is now a foolproof method for even the most harassed and pathetic weaklings in the world to stand up for themselves and finally become men.”

“I saw Larry earlier this morning,” he says with touch of awe in his voice. “He was at Alex’s house. Um, Alex is the annoying douchebag who liked to pick on us when we were kids. Shit, the asshole still teases us and shoves us around to this day.”

“Oh, man - Larry looks so cool now, with those thick muscles, that stubble, those shades… …anyway he just marched over to Alex’s front door and fucking ripped it from it’s hinges with his bare hands! Shit, he just stood there smirking at me like a fucking badass, with a 7ft door clenched in his fucking hands. Then he simply slammed his hands together and that air was filled with sawdust and splinters!”

“After that… …well let’s just say Alex didn’t have a fighting chance against the new and improved Larry Woodhouse.”

“That’s when I made my decision to actually follow through with this. Larry has given me the chance to become as awesome as him and I’m not going to fucking blow it!”

Jamie gives his boney shoulders a brief shrug and places a pair of slick-looking shades upon his dorky face.

Suddenly a bucketful of what looks like ice-laden water is dumped over his head.

Then his panic suddenly passes and he stands still.

“Oh, fuck!” he moans. The change is very sudden - his weak and pathetic flesh just absorbs the chemicals like a sponge, leaving behind only the water that had contained them. Then, bulbous muscles quickly swell all over his frame; starting off looking like watery bags of blubber but hardening into powerful ridges of muscle fibre as they approach their final and immense dimensions.

It was all over in seconds.

Jamie didn’t bother to flex - he knows damn well his thick, hard musculature is a fucking masterpiece. He simply stands ominously still, his square-jawed face emotionless, allowing the rivulets of water to drip down his imposing body. He waits several seconds for everyone to take in his  mind-blowing appearance. He knows that most of his audience would now be blowing their loads.

“I now challenge Joey Ruscoe, Nathan Field and Frank Davies,” declares Jamie in his new deep and commanding voice. “The chemicals will be sent to you within the next few hours. The three of you fuckers have 24 hours to decide if you really want to throw away your pathetic wimpy old lives and instead become intimidating and sexy supermen. The chemicals become inert once the 24 hour deadline expires. You have only one chance at this.”