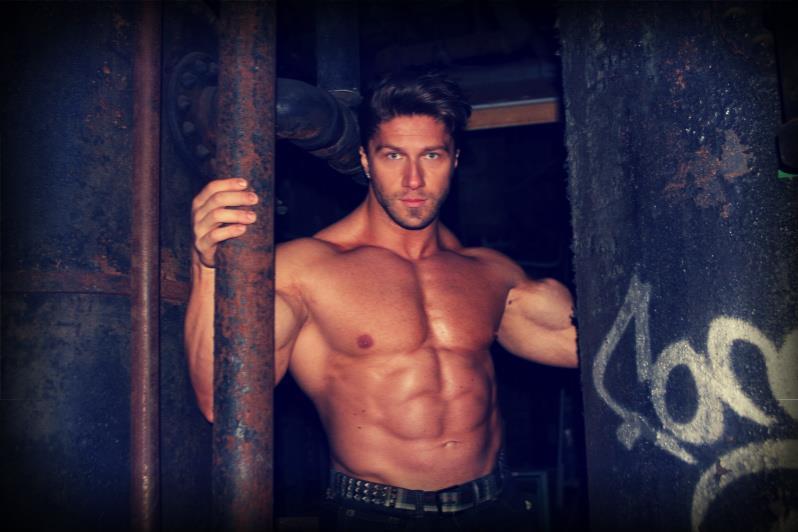 When Lewis finally arrived he knew it was all over. Franklin had beaten him to it and was now casually resting his imposing musculature against the old pipes.

“You’re too late!” said Franklin in triumph. “I’ve already released the nanobots into the water mains. In the next few hours they’ll have distributed themselves across the entire campus water supply.”

“Aren’t you forgetting something, dork?” Lewis countered. “I’ll also be drinking that water! You may be stronger than me right now, but soon I’ll be towering over you again and you’ll be a complete pussy next to me. I can’t fucking wait to put you back in your place! I’ve really had it up to here with your new muscles and stupid tough-guy attitude.”

“Oh, for fuck’s sake Lewis!” said Franklin with growing impatience. “Do you honestly think I’ve just accidentally pressed the ‘on’ switch to hulk-out every bullying juicehead in the local area?”

“No,” he continued with a smirk. “My nanobots are much more intelligent than that! You see they are programmed to carefully analyze the host first - to confirm if they are actually inside the body a feeble-muscled wimp. Once they take one sniff of all that horse steroid shit clogging up your veins, you’ll be damned sure that my nanobots will self-destruct rather than give you a new fucking edge. No, you and your buddies on the football team will never get to feel what’s it like to be a god.”

Franklin released his hand from a pipe with mock indifference, leaving behind the perfect imprint of his thick fingers deeply embedded in the old steel.

“Ah,” said Franklin with a cruel smile. “I can see from your eyes that you are beginning to understand just how much shit you are in.”

“Just think!” he continued. “Think of all those unsuspecting weaklings and coach potatoes in this college who will follow their pathetic day-to-day routines over the next week.”

“The weather has been really ridiculously hot lately and our test subjects are not the type of people to walk around the campus shirtless and flaunting sexy abs. No, they prefer to hide their pathetic physiques and sweat out the day in baggy clothing. And these water-starved wimps are not going to pass by one of the college’s delicious-looking water fonts without stopping to take a long and refreshing drink.”

“And who knows how many sweltering nerds will want to take a cool relaxing shower each day? Of course they will also be brushing their teeth twice a day and, let’s face it, who in their right mind ever leaves a restroom without washing his hands? So the chances of our target demographic completely missing out on water is virtually nil.”

“Fuck, even food needs to be washed - I guarantee you that simply biting into a french fry from the cafeteria will be enough to kickstart the process!”

“And what a process it is,” he explained with delirious joy. “First their little, frail bones will be forever altered; they will slowly elongate and thicken - growing in height so that our innocent lab rats can easily look down upon their former sports heroes when they need to sneer at them. And their bones will become so dense that a fucking truck could ram into their skeletons and they wouldn’t fracture a bone.”

“Then their weak undeveloped muscles will simply blow up into swelling masses of brawn as puny muscle fibers multiply and inflate into thick, dense cables; each becoming stronger than tempered steel. What was once mushy flesh will be terraformed into a landscape of unyielding ridges and deep gorges. In just a few days, these shy, weedy young boys will have transformed into an army of hulking and domineering gladiators.”

“And what will happen to you and your cool jock friends then?” sneered Franklin. “Your precious football scholarships are going to be as valuable as used toilet paper when the college realizes that the wimpy water boy can easily pummel the entire team single-handled. Shit, considering the amount of abuse he gets from you and your cronies during a game, I’ll be fucking surprised if the water boy doesn’t take it upon himself to send the whole team into intensive care!”

“Face it jerkwad - you are so fucked.”