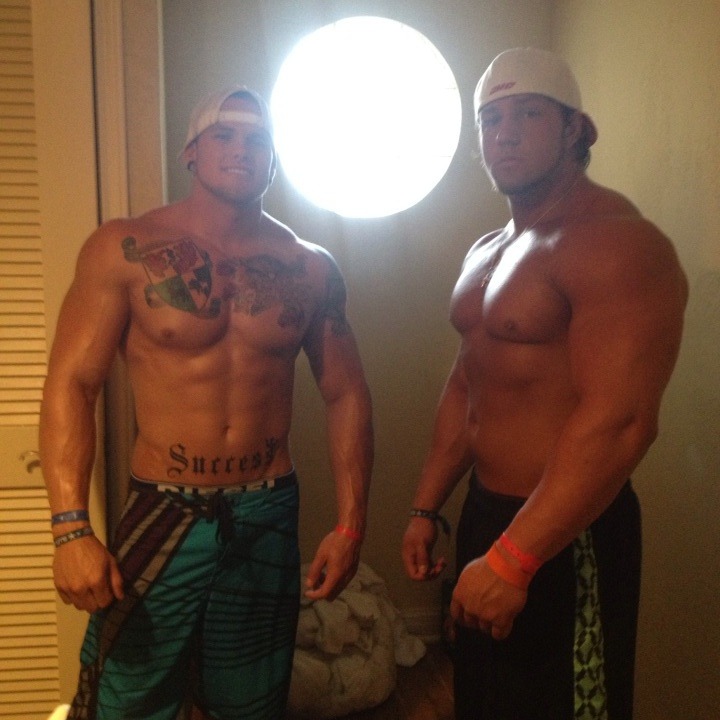 You Should Have Touched The Meteorite

“You should have touched the meteorite man,” growled Chris as he flexed his impressive bicep right up to Oliver’s face. “You could have ended up like Scott and me - transformed into a sexy muscled jock instead of remaining the pathetic wimp you are.”

Oliver could only stare in awe as his two best friends showed off their newly hulked-out and sexy physiques.

“But no,” continued Chris. “You had to be a pussy. Screaming at us not to touch the glowing rock, putting your hands over your eyes when we prodded the rock. What did you think would happen? That we would get disintegrated?”

“Fuck if we had listened to your whiney concerns, we would still be in our old wimpy acne-ridden bodies! You almost made me miss out in all this power and strength, you little fucker!”

The angry muscle-boy shoved the nervous little runt to the ground, bouncing his pecs to intimidate the weaker boy.

“Our parents were terrified,” sneered Chris “they kept us out of school. Tried to get doctors to find out what was wrong with us. But the doctors couldn’t find anything out of place - all they could do was declare that we were in perfect health with super-athletic bodies and massive 10-inch dicks.”

Chris groped his massive bulge with an arrogant smirk.

Oliver jumped out of his skin as Scott casually smashed his fist through the nearby wall, his heavily-muscled forearm simple ripping through the concrete as if punching through paper.

Scott approached Oliver, wiping the concrete dust from his arm.

“We stashed the glowing rock in a secret hiding place,” explained Scott in a sudden hushed tone. “Neither our parents or those doctors know of it’s existence and only Chris and I know how to access it.”

“In fact, only the two of us are strong enough to retrieve it from it’s hiding spot,” boasted Chris as he flexed the two bludgeoning weapons he called “arms”.

“Anyway,” continued Scott. “We decided to share our discovery among the rest of the local nerd community. You know Casey Lawrence? The little squirt with the nervous stutter who obviously has a thing for our star quarterback, Craig Stephenson? Craig also being the bullying jock who keeps picking on him?”

“Let’s just say Craig quickly got over his homophobia when two days ago a six-foot-six titan with Casey Lawrence’s snarling head atop it’s massive shoulders confidently strode into the team’s locker room and showed our quarterback hero just how much pleasure a pornstar-sized cock can give a man when it’s pistoned in and out of his ass. I hear they are actually a couple now.”

“And what about Beanpole Eddie?” said Chris. “Remember how he got beaten up pretty badly a few months ago in that mugging? Well in the past few days a masked vigilante has roamed the streets; a massive, muscle-bound man hiding in the shadows who can pulverise muggers, drug dealers and rapists with just his bare hands. Rumours are that our new benefactor is bullet-proof and can punch through steel. I’ve heard that some of the victims he’s rescued have been ever so grateful, giving the testosterone-fuelled avenger some much needed sexual release. It seems like there are lots of girls out ther who share Eddie’s dorky superhero fantasies too.”

Oliver’s mind was racing from excitement. If he could get his hands on that meteorite, then he too would become a sexy hunk. Just a few weeks ago his big crush, the gorgeous Emma Reynolds, had completely humiliated him in public - laughing at his pathetic attempt to chat her up during lunch break while declaring to everyone in shouting distance that she could never date a shrimpy little weakling like him.

Images of the beautiful Emma worshipping a new meteorite-transformed version of Oliver Mitchell’s physique were now flooding into the little nerd’s brain. He could picture it now - him standing tall and imposing like an ancient Greek statue come to life while Emma was on her knees expertly caressing each individual cobblestone of his awesomely-ripped midsection with her sweet tongue. His now massive and masculine hand would slowly and firmly steer her delicate mouth downwards, letting her kiss her way down his abdomen’s thick veins until her mouth was within an inch of the angry bulbed head of his now formidably-sized baby maker. He would then stop, his immovable hand keeping her head in place. He could hear her cries of frustration as she tried to worship the super-cock that was so tantalising close. But Oliver the super stud wouldn’t allow it. He could hear her pleading with him to forgive her for her cruel comments from a few weeks ago. She was wrong, he wasn’t a shrimp at all - he was a god made flesh and she needed to feel his divine fuck-stick inside her. Eventually the arrogant spoiled girl would be reduced to begging - offering to become his personal sex slave if he allowed her to just touch his perfect cock. With an approving snarl, Oliver would plunge the entire length of his massive shaft down her throat  and violently fucked her beautiful face; listening with pleasure to the slapping sounds of his over-sized balls smacked against her chin to the pounding of his hips; reveling in the churning sensation deep in his balls as he built himself up to unleash a titanic load of cum down her throat…

“Shit guys, I’m sorry I acted like a complete dork,” he apologised as he entered reality.

“Fuck, man” replied Chris giving Oliver a friendly shove to the chest and helping his smaller friend to his feet. “I’m just messing with you - I’m not really mad at you.”

“So is there any chance that I could get my hands on the meteorite?” asked Oliver eagerly.

“Sorry man,” said Scott, a cheeky grin invading his face. “We would love to grow you into a super-hot muscle stud but we can’t.”

“Huh? Why?” said Oliver in puzzlement and disappointment. “Did the meteorite stop working or something?”

“Nah man, the rock’s working fine. This is just a business decision,” he explained. “You see, we already have an agreement with another client who gave us a shitload of sweet computer equipment in order to undergo his transformation. Part of the deal was that we had to swear to him that we would not let you near that rock. Sorry man - we don’t break our word.”

“Who the fuck would set up a deal like that?” snapped Oliver in frustration. “And why would you even agree to such a thing?”

“Hey, it was your little bro man!” said Chris with an evil grin. “Actually, perhaps ‘little’ isn’t the appropriate word to describe your brother now. We agreed to do it because we thought it would be fucking hilarious to see him be the bigger brother for a while. ”

“You haven’t seen your bro in the last 36 hours, right?” asked Scott, smirking at Oliver. “Chris and I were both here yesterday when your brother rang up to ask your Dad if he could spend the night over at his friend’s place to play computer games. That was just before he touched the rock. Now I can guarantee that the magnificent specimen of hot manly muscle who left us yesterday had absolutely no intention of sitting on his new rock-hard ass all night playing Call of Duty with puny dweebs!”

“I take it that you haven’t checked your brother’s Tumblr in the last few hours?” asked Chris.

Hands trembling, Oliver pulled out his phone and looked up his brother’s Tumblr. Oh fuck! Gone were all traces of the geeky site set up by little Seth six months ago. He only ever used the microblog to reblog animated gifs from his favourite anime shows and he had barely any followers. In it’s place was a shrine to the new Seth - a new Seth that looked much more bigger than either Scott or Oliver. A new Seth that now sported designer stubble, wore shades, walking around shirtless and loved to scowl at his camera-phone. He looked hard, he looked tough, he looked mean and he looked down right sexy. It seemed the Tumblr community thought so too, within a matter of hours his photos had been reblogged hundreds of times - and from the looks of the links it had been mostly reblogged by gay dudes who had probably jerked off their dicks raw drooling over the intimidating muscle stud who had only hours ago been Oliver’s runty, even nerdier brother.

Scrolling down the page, Oliver’s heart sank further. He found out where Seth had been last night. He had been hanging out with Emma Reynolds, or as his brother had succinctly captioned under a video of the newly-birthed muscle stud drilling his immense cock in and out of her dripping pussy: “Giving this dirty-minded virgin the most intense fucking she’ll ever experience. She’s so fucking easy too - I’ve lost count how many orgasms I gave the bitch. I can’t fucking believe my ‘big’ bro wasn’t able to bed this dick-slurping slut! What a fucking wimp.”

Oliver felt a large hand clasp him firmly on the shoulder. It was Chris.

“Welcome to our new lives, little Ollie,” he announced with relish.

“You know what? You guys are just major dicks,” replied Oliver angrily.

“Fuck yeah!” yelled the musclebound jocks in unison as they did a high five.