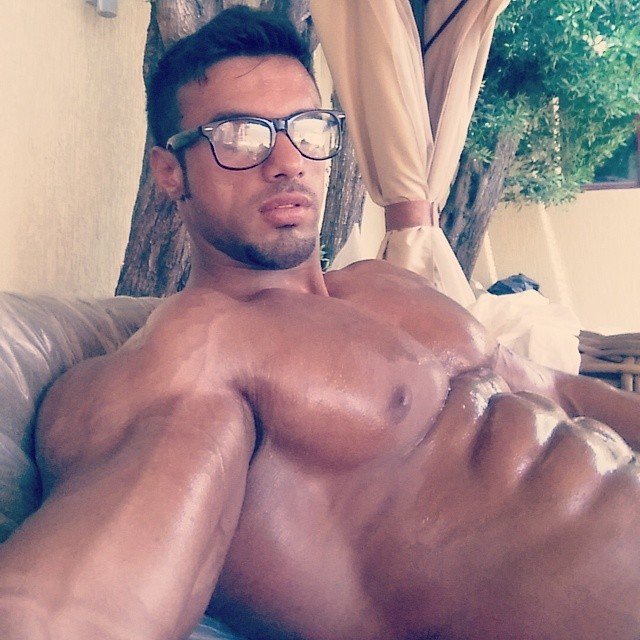 “This is Marshall Walker sending all you puny little fuckers out there another daily update of my video diary.”

“It has now been 23 days since I first used the Chronivac. Do you like my new tan? I spent over an hour this morning playing with the skin tone sliders until I got it to exactly the right shade I wanted. Doesn’t it look so fucking sick? I think it sets off the cuts and veins of my body perfectly, yet looks very natural.”

“Oh, sorry - those slurping sounds you hear? I forgot to introduce you to Charlene - you can just about see a lock of blonde hair bobbing up and down at the edge of the camera. That’s her! She was kind enough to volunteer to work on my cock during this webcam. She’s also the reason I’m a bit sweaty.”

“But you perverts love it when I’m all glistening with sweat? Hah! I thought so.”

“As you can see I have decided to start wear glasses again. Using the Chronivac to give myself perfect eyesight was cool and all, but lately I had a real hankering to remind myself that this hunk of prime beef is 100% nerd inside. Since returning to my bad eyesight, I think it’s making me more of an animal during sex. I mean right now I feel like I’m looking at Charlene through the eyes and brain of a nerd, yet I also know that Charlene could never bring herself to place her lips on a wimpy nerd’s dick. It makes me feel like I’m punishing her somehow, yet she’s doing this all willingly - and that makes me feel dominant; more powerful. I just want to pound my massive cock into the back of her skull. It feels like I have to constantly prove that I’m all man.”

“Anyway, sorry for the absence of yesterday’s video - I need to explain myself. You see before I decided to return to wearing dorky glasses, I had a slightly more ambitious plan. I thought it would be really hot to temporarily revert myself to my original weak, ugly, dorky body and still have everyone in the neighbourhood think me as a sexy muscular stud.  I was dreaming of this scheme for days - my dick would get rock hard just thinking of my old scrawny self in the middle of an orgy of football players and cheerleaders - all of them wanting me to pound their asses and pussies with my old two-inch dick.”

“So yesterday, I decided to give this sick little fantasy a tryout. Fuck - what a disaster! That idea turned out to be one of the biggest mistakes in my life! It seems that without a flow of super-masculinizing hormones keeping me in a constant alpha male state of mind, returning to my old body also transformed me into a pathetic pussy. I suddenly had a fucking conscience again and before I knew it, I was feeling guilty over all the changes I had done with the Chronivac in order to become the most worshipped sexual being on Earth.”

“Luckily I had guessed that there was a risk that something like this could happen - after all, I knew my old mind better than anyone! So before I had changed back into nerdy little Marshall, I also temporarily removed my knowledge of the Chronivac’s existence so that if the wimp completely chickened out of this perfect life, he couldn’t do a fucking thing about it. I then set up a trigger that would automatically return me to muscled godhood after 24 hours, giving me an emergency escape plan.”

“Oh, that reminds me! This time I actually remembered to set the camera to record the transformation! So if you lot want to beat your stubby little dicks off to a scorching-hot video of a scared little stick-boy being forced to beef up into a cocky musclehead then send me a private message. Believe me this is the hottest muscle growth video you’ll ever see on the net! I have jerked my cock raw several times today playing that clip over and over again. There’s something fucking empowering watching that puny wuss cry pitifully when he suddenly realises that the transformation’s happening and he can’t fucking stop it. Also there’s a beautiful moment when the expression on his face suddenly changes; when he stops crying and screaming; when he starts to flash a cocky grin and starts to play up to the camera. Then I know that I have entered the building. Goodbye dork, hello stud!”

“Hee, maybe I should record a video of me watching the transformation video? How about it? Do you all want to watch me beat off to myself? Wouldn’t that be hot?”

“My former self scrawled an entry in his diary yesterday. It makes some hilarious reading: “Oh, god! What have I done? I’ve unleashed a monster.” Hah! He may act scared, but I know the wuss secretly loves this.”

“His self-loathing didn’t stop the little shit from accepting Neil’s offer of a blow job yesterday. It’s always been his fantasy for the star wrestler to go down on his knees and clamp his perfect mouth around little Marshall’s puny cock. The little dork had no problem playing along with Neil’s belief that he was choking on the prime 10-inch monster cock of a muscle god. It made the nerd feel like a man for the first time in his life. What a fucking hypocrite! Declaring me a monster, but willing to take advantage of my so-called monstrous deeds!”

“So, let this be a fucking warning to all you wimps - don’t be fucking pussies or you’ll never get anywhere.”

“Fuck, what am I even saying? Over 500 viewers subscribe to my videos in the last three weeks. Videos of me proving over and over again that this Chronivac thing fucking works and has made me a god among men, yet you lot are still scared to try it out for yourselves? And believe me, if you were using it you wouldn’t be beating yourselves off to videos like this when you could have hot people like Charlene and Neil giving you some real toe-curling sex.”

“You know what? You lot are just a bunch of worthless wusses. Finish me off, Charlene!”