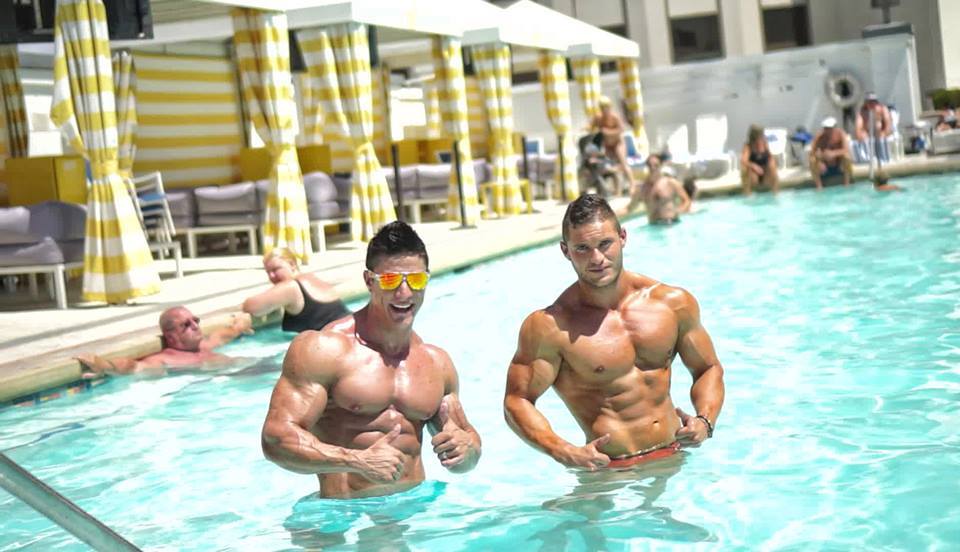 “And here are the two boys after they discovered that genie lamp burried under those old ruins. You know, the ruins I showed you in the last album. It seems that the little rascals sneaked it away from the site unbeknownst to us and hid it in their hotel bedroom. Bless them! You can see that they’re really getting into the swing of the vacation now. They’ve stopped hiding in the shade, reading those awful comic books, and actually started to join everyone at the pool. What had they wished for by this time, Harold?”

“I believe it was ‘to be turned into confident, sexy and handsome muscle studs’ _ dear. Also I think just before they stepped outside that they had wished that _‘all their family and friends would believe all their wishes to be completely natural occurrences and to have their complete support in all their endeavors’.”

“Oh, that’s right Harold! Aren’t our two little boys so clever? And now they are so rugged and handsome too! I’m so proud that they decided to get rid of their old disgusting overweight bodies. They were just too introverted and ugly when they had them. I never noticed at the time how much they repulsed me but now that they’ve transformed into two hot domineering musclebound jocks, my eyes have finally opened. They were so pathetic and wimpy before the change, weren’t they Harold?”

“And now they’ve so sexy and masculine. They really stole the show in the pool - showing off their athletic tanned bodies in front of the awestruck crowd. And they have become seriously hung too; like those porn stars! I’m so pleased they lost their virginity to those strippers that very night. Hearing those balloon-titted sluts beg to be violated by our two little angels really warmed my heart. Listening to their orgasmic screams when our darlings nearly split their asses in two with their over-sized penises really brought home to me that my little boys were growing into men. It really brought a tear to the eye. They grow up so soon.”

“Sorry dear, but they didn’t actually lose their virginity that night. That afternoon I overheard the two boys wish to have ‘massive and thick twelve inch cocks and superhuman sexual stamina’. They then teamed-up and penetrated that cute mischievous genie in both her pussy and mouth as a big thank you.”

“Oh, they’re so gracious Harold - I’m glad we raised them up to be so appreciative of other people. Anyway I don’t have any photos of that, but I do have snaps of those strippers passed out comatose, their juices making a gooey mess on the bedsheets and the boys grinning cheekily to the camera with massive hard-ons and giving me the thumbs up. I was thinking of getting it enlarged and framed.”