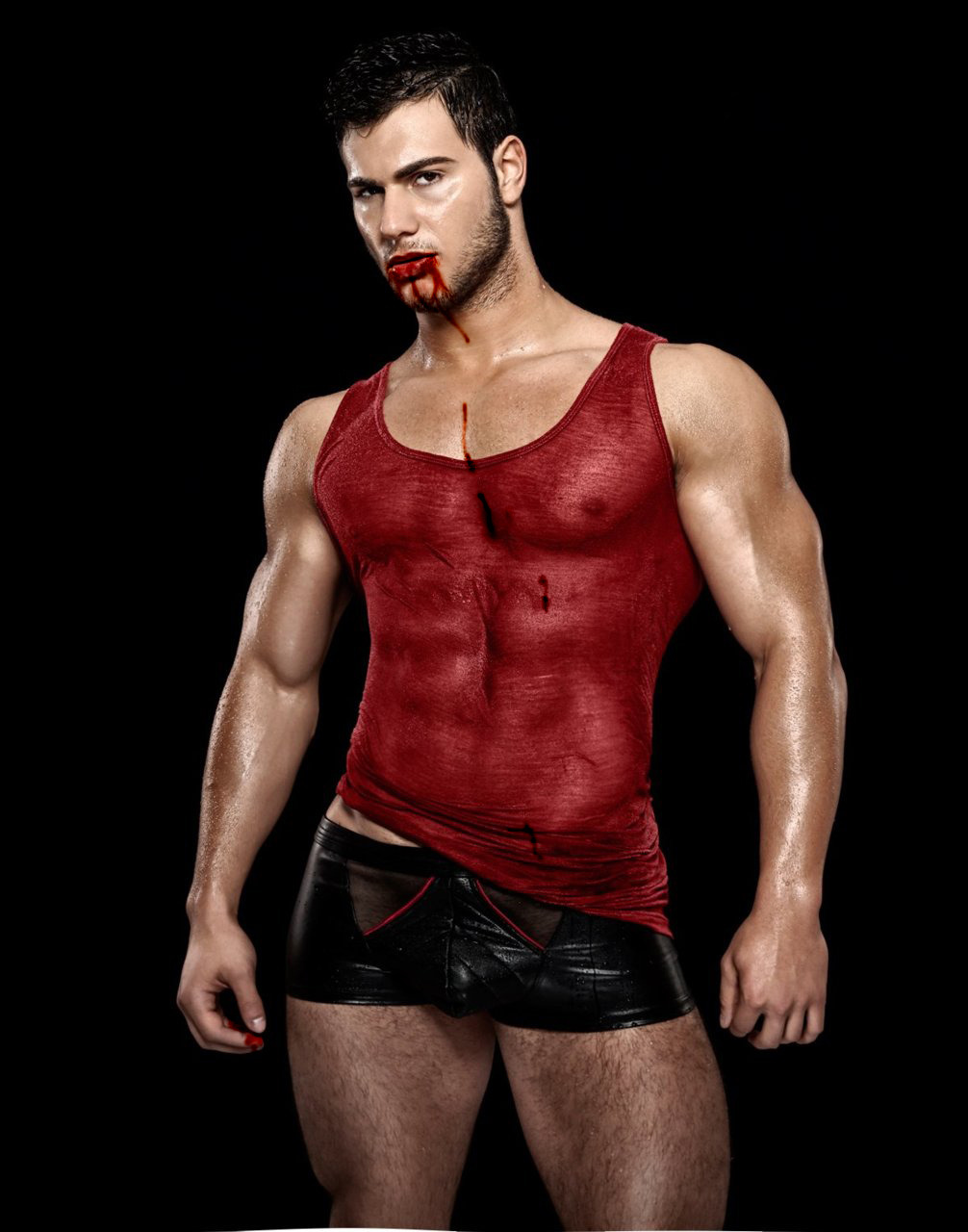 Wallace had been missing for almost a week. His absence was barely noticed at school - the quiet straight-A student had cultivated very few friends. However when he returned, suddenly everybody was taking notice of him.

His acne had completely cleared up and his braces removed. He must have decided to wear contacts too. The ugly nerd now had the face of a chiseled male model and the smile of a Hollywood leading man. He also decided to start wearing skin-tight clothing that revealed a strong athletic body that most men would trade their souls for. Who would of thought that Wallace had a body of an adonis under his usual baggy clothes?

Juliet had become entranced by the new Wallace. Despite his newfound status as Mr. Popular he had now become even more of a loner, avoiding all the flirting attention and acting all sullen and brooding. This only made the hot cheerleader more attracted to him. She approached him several times, gently trying to coax him to open up to her. Each time she was rebuked, sometimes with outbursts of rage.

However Juliet was very sensitive over people’s true feelings and could see past his angry outbursts. She couldn’t help noticing a strange sadness in his kind eyes. He was doing his best to protect her from a shameful secret.

In her heart, Juliet knew that something bad had happened to him while he was gone and she suspected that it had all to do with his sudden wimp-to-stud transformation.

She become determined to solve his little mystery.

She started following him after school. He hanged around town during the night, watching from afar with a starved look on his face as people entered and exited night clubs, cinemas and restaurants.

Finally, after days of intense shadowing, she caught him in the act. He was by himself spending time swimming in the pool after school, looking downright scandalous in his ultra-tight swim trunks and wet vest. After spending a half-hour doing lots of strong and sensuous laps in the pool, he suddenly launched himself out of the pool and ran for the boys locker room. His face was a picture of horrified desperation.

Suddenly Juliet heard a blood-curdling scream. She ran to the locker room, her heart beating rapidly. She knew deep-down what all his behavior was adding up to but didn’t dare to believe it. She opened the door with trepidation.

There in the middle of the locker room lay the prone body of one of the school’s nerds, an overweight pimple-faced boy who Juliet seemed to remember as being a former friend of Wallace’s. A large bloody gash had been torn out of the boy’s neck and Wallace squatted beside the body, his mouth drenched in blood.

Tears rolled down Wallace’s face as he saw Juliet approach him. But Juliet could see past the monster feasting on the bloody carcass. She could only see the sweet sad boy who had lost his innocence.

She eyed up his utterly masculine and powerful muscles and felt herself grow weak inside.

She knew how to comfort the poor boy.

God, it felt so fucking good getting serviced by a girl who truly believed you were some kind of tragic antihero. It made the whole game completely worthwhile. This was his third chick this week - Stacey and Kimberly had also offered up their hot athletic bodies to him in order to satiate the “growing monster within him”.

Gotta love the paranormal romance trash that all girls read these days. All Wallace had to do was act like a brooding douchebag all day and occasionally drench his mouth in pigs blood. Suddenly he was every young girl’s fantasy lover.

He winked slyly at Pete. The virgin nerd was doing his best to act unconscious while a hot bitch was devouring his best friend’s cock with lots of orgasmic moaning. If Pete hadn’t spend all afternoon applying makeup to himself, his face would be blushing bright scarlet by now. Pete’s puny member couldn’t help stand fully erect in all of it’s three-inch glory.

Yeah, Wallace will have to fix Pete’s puny little problem soon. Tonight he will give his best friend an injection of the superstud formula. Pete will then"disappear" for a few days and there will be another hot and hung muscle boy sexily moping about in the school hallways.

Maybe they would be able to arrange a three-way? It really turned him on thinking of pounding a pathetic vampire wannabe in the ass while watching her choke on his best friend’s soon-to-be monster cock.