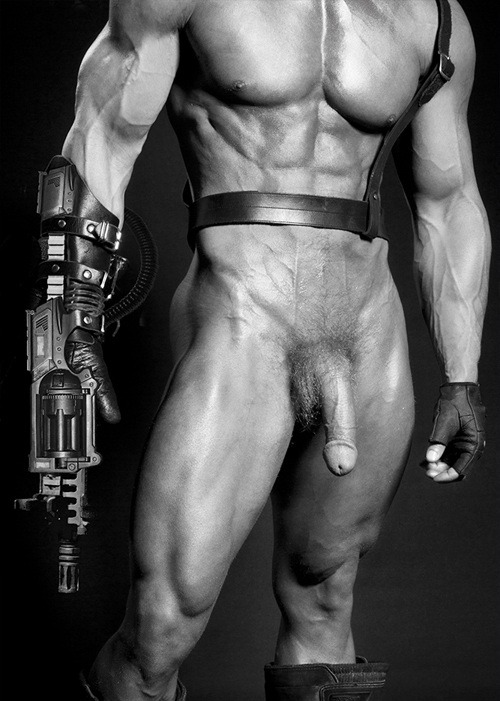 “Fuck yeah!” growled Kurt, as he admired his thick and veiny physique in the mirror. Just a week ago he had been a balding and overweight 43-year-old drugstore clerk. Life had become a dreary routine of following boring responsibilities while reminiscing over the dreams of his youth.

Then the accident happened. An oversized SUV lost control of itself in a busy urban road and bulldozed through a helpless Kurt. He should have been a complete goner. There was absolutely no way he could have survived the impact.

Luckily for Kurt, he was at the top of military’s list of potential candidates for their new cyber-soldier experiments; matching each of their criteria for being a true American patriot perfectly. They quietly intercepted his unconscious body and set about creating the most powerful man on Earth.

His flabby tissues and malnourished bones were replaced with artificial muscles and bones, giving him superhuman strength, reflexes and aim - all contained in a 6’ 8" fitness model body. Cybernetic implants were also installed, feeding his body an unrelenting cocktail of wonder drugs that dramatically increasing his recovery and strength further while inducing his feelings of confidence, violence and overall wellbeing.

When he woke up, Kurt had become a masterpiece of sculpted brawn and male beauty. He had no idea what had happened to him but it felt so fucking good. The chemicals being pumped into his body had completely overwritten his once timid persona. He was now an unstoppable badass with a permanent hard-on and an arrogant grin.

It took only five minutes for the life-long virgin to convince his attending nurse to suck his super dick. He then spent the next week “recovering”, i.e. fucking anything that moved while reading up on his new circumstances. He couldn’t wait to embark on his new career in the military.

But first he had to find a way to sneak back into his hometown and assassinate the other Kurt Reid before the military realized that they have the wrong Kurt. His namesake was an ex-marine and an over-grown jackass who made little Kurt’s life hell way back in high school.

It will feel good crushing that moronic piece of shit into a bloody smear.