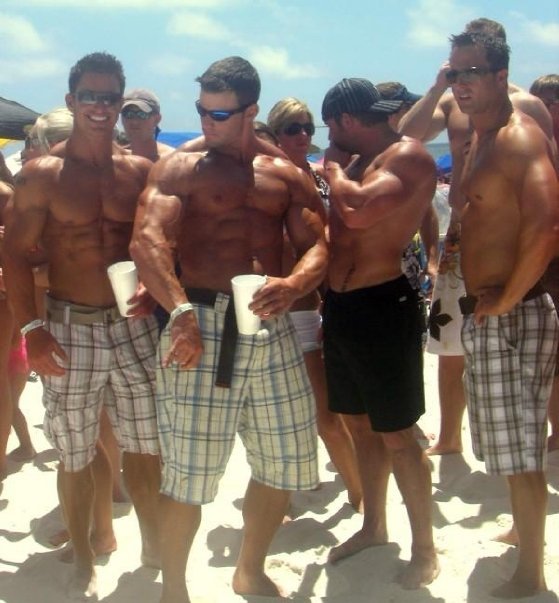 Here are Bradley, Milton, Frederick and Lewis, close friends from the chess club enjoying their Spring Break. Or, as they prefer to call themselves now, Brad, Brickhouse, Fredster and Horndog, hardbodied superstuds enjoying a vacation of mind-blowing sex and cheap beer.

They’ve all had a terrific year. Fed up with being harassed by the meatheads of the football team, the once-scrawny members of the chess club decided to steal the football team’s steroids supply from Coach McKinley’s office and replace them with sugar pills and colored water.

This caused a major crisis at the school as the dick-heads in the football team dramatical lost their intimidating size; having relied on steroids to maintain their powerful mass from an early age.

Meanwhile, the chess club decided to try out their hoard on themselves, hoping to give their pathetic puberties a healthy boost.

Unbeknownst to the thieves, Coach McKinley had made some excellent contacts in the pharmaceutical industry and the roids were very high-quality experimental products designed for the next generation of sports doping. McKinley had to dole out these powerful substances sparingly otherwise he would have a high-school team that would be larger and more powerful than the top NFL teams.

The dorks from chess club were inadvertently injecting themselves with ten times the dosage of the football team. Within weeks, they had outgrown their tormenters, obliterating their puny bodies and shy personalities to become aggressive and arrogant musclegods. Now they fucking dominate the entire school.

They still find the time to attend chess tournaments, enjoying terrifying their wimpy opponents as they menacingly flex their powerful bodies when they make their moves. Also, Brickhouse has a thing for nerdy-looking girls. He really gets off on their wide-eyed hero-worship expressions when he seduces them. The intense feelings of his huge cock smashing into their tight virgin pussies are also a bonus. Needless to say, this year’s tournament organizers have had to deal with a whole lot more sex and violence than in previous years.