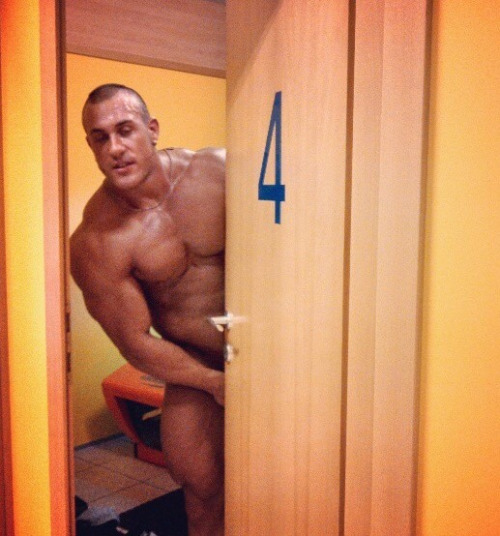 I looked behind me. A hulking, musclebound figure was crouched behind the door of room number 4; an ecstatic grin on his face as he hid his obviously-naked body with the door. He was calling me over.

So much for Mr. Marsh’s claims that the school had booked up the entire hotel! It just goes to show, never trust anything a schoolteacher says.

Hold on… room number 4? Wasn’t that Marsh’s room? Holy Shit! The sly dog had somehow smuggled an enormous, greased-up bodybuilder into his bedroom. I never would have thought he had it in him. And doing it in the middle of a school trip? That took some major balls.

But hang on a sec - why would a roided-up rent boy be trying to wave down a high school student? Surely Marsh would have warned him to keep away from the students?

I approached the door cautiously.

“Hey kid,” said the bodybuilder in hushed tones. “Could you pass me the bag by that curtain behind you? I need to fetch a few items.”

I surveyed the window behind me and found a worn-out schoolbag haphazardly stowed behind the curtains. It looked to have been dumped there in a hurry. I retrieved it from it’s makeshift hidey-hole.

I was taken aback a bit when I saw it. It certainly wasn’t the sort of apparel that I imagined a hardcore bodybuilder would lug around. Don’t they usually go around with those branded sports bags? Or was I just being a stereotyping moron? Come to think of it, Marty Knox, the class clown, owned a schoolbag that looked just like this.

I grabbed my prize and headed back to the naked muscleman at the hotel room door.

“Here you are sir,” I said breezily, trying to act as if talking to one-in-a-million muscle-god gigolos were commonplace to me. “One bag coming up.”

“Jesus Christ. Shut the hell up, kid!” whispered the meathead angrily. He quickly glanced inside the room to see if anyone had overheard. “If you haven’t noticed, I’m trying to be inconspicuous here.”

He roughly snatched the ratty-looking bag from my hands, forcing the door gap to open wider as he wedged his immense bulk into it - effectively blocking the tiny bag from the view of anyone within the room. He was now giving me a fantastic view of his completely naked lower body and he didn’t give a damn. Why wouldn’t he? His zeppelin-shaped thighs were moored in place by a sick net of thick, twisting veins and a substantial-sized weapon of mass destruction gently bobbed from his shaven crotch. He had definitely nothing to be ashamed about.

Although my own missile was vastly inferior, it was quickly becoming just as perspicuous as the monstrosity that bobbed before me. I tried to keep my cool but inwardly, I was praying that overly-hormonized superman didn’t glance down at my crotch.

I tried to focus on what he was doing. He was rifling through the contents of the bag, his brawny digits quickly flipping through an unorganized mess of papers and nicknacks. I gave a little start when I suddenly recognized that most of the clutter were assignments and exercises from my classes. He didn’t seem to notice my reaction, which was a relief - I didn’t want to have to explain to a 300lb brute that he seemed to be searching through the bag of one of my classmates.

Finally, he managed to find what he was searching for - about a dozen packets of giant-sized condoms. Honestly, if I hadn’t just seen his cock bounce against his knees, I would have assumed that they were novelty-sized jokes. They were covered in a layer of dust, having obviously been lying forgotten in the bag for months. Curiously, they lay among a jumbled pile of rubbers of various lesser sizes. Maybe he kept the smaller ones in case his clients forgot to bring protection?

“At long fucking last I get to use these,” he said with triumph. “The Terminator may have been a hot fuck, but his fantasies were pretty tame compare to this.”

Wait a sec - the Terminator? As in Brock “The Terminator” McFarland? Fucking hell! It was well-known that the sexy school quarterback was gay - those leaked videos of him getting pounded to shit by those hot-as-hell fitness models were proof of that. But I hadn’t heard anything about “The Terminator” hitting the sack with a heavy-weight bodybuilder. They didn’t seem to be his type - he seemed to get off on that ripped “aesthetics” look.

He saw my eyes widen at his baby-maker and glanced at my crotch in response.

“Nice dick kid,” he whispered with a smirk. “But you are so way out of my league.”

I reddened with embarrassment as he chucklingly dumped the bag it into my arms.

“Now little man, shove this under that curtain and fucking scram. I never want to hear from you again.”

The next day Mr. Marsh was walking around with a pronounced limp, which caused a lot of childish snickering from the rest in the group. Unfortunately for me, his painful hobbles were sending my imagination into overdrive. With my teenage hormones going through the roof, I spent most of the trip clutching a conveniently-large notebook tightly to my lap.

It didn’t help that I was forced to sit beside Marty Knox on the journey back. It’s hard to keep a raging erection in check while that shrimpy little dork kept nudging me and telling dirty jokes. Most days, I found him annoying but today he was driving me round the bend.

I nearly came to blows with him when water started to leak from his bag and spill onto my pants. That was, until I realized that the sticky substance wasn’t water. I reached into his leaking pocket and retrieved a small, uncapped bottle of baby oil.

We both looked at the bottle, then at each other.

Marty grinned at me mischievously, quietly slid the bottle back into the side pocket and carefully leant over to my ear.

“Listen little man,” he whispered, his voice magically transforming into the deep rumble of last night’s mysterious stranger. “If that hard-on that you’ve been nursing all day is a result of you daydreaming about being anally fucked by an egotistical, sweaty muscle thug then maybe, just maybe, you do have a shot with me.”

“Just keep your mouth shut about this and if you’re good, we’ll see if we arrange to share a hotel room with each other tonight.”