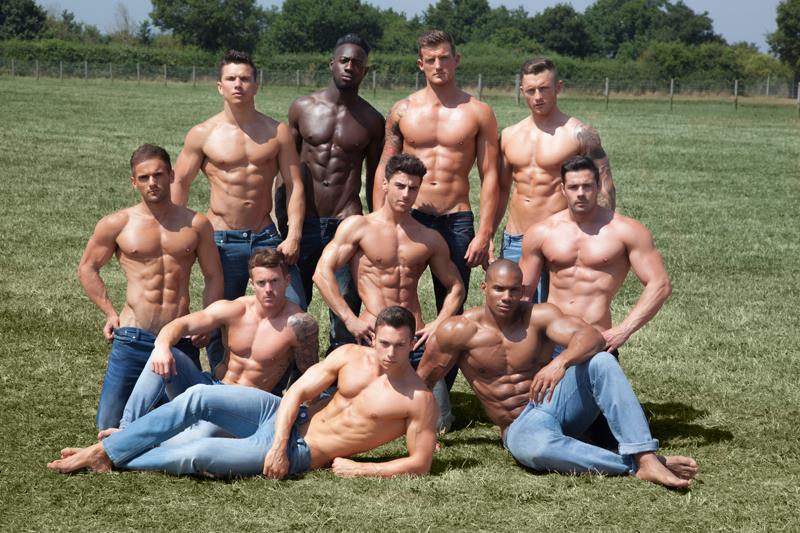 The Legion of Alpha Dicks

They were in the middle of the field, parading their bare, perfectly-ripped musclebound torsos at the early morning sun. I recognized all of them. They had all been in the video. Each one had at some point in the last month fucked Stacey.

And she had really enjoyed it.

I was really raging now. I didn’t get to be the school’s top linebacker for having a sweet deposition.

“Where’s Jason?” I bellowed out to them. “I know the little twerp’s behind all this. He posted that video online and messaged me to meet me here. So? The little shit doesn’t like to get beaten around a bit? I can fucking tell you that whoring my girlfriend out to a bunch of pretty-boy douchebags and then recording them is not the best way to convince me to stop my bullying ways! In fact I’m dying to punch the fucker’s teeth out!”

“I’m right here you jerk,” replied one of the shredded adonises before me. He immediately leapt to his feet in a fighting stance. His face looked deadly serious.

“Come and get me!” shouted another, as he cracked his knuckles ominously.

One of the men lounging on the grass gave me a shit-eating grin.

“I believe this is the part where you now regret having ever ridiculed me for believing in all that magic shit,” he explained, as he proudly flexed a bicep. “For being ‘made-up nonsense’, it seems to have done a lot of wonders to me.”

Jason? Nah, it can’t be. This has to be a prank. The dork was probably hiding in the background, recording all of this with a camera.

“You think you can scare me?” I gloated. “The real Jason may be in hiding now, but he has to come out sometime and then I’ll kick his ass. I’ll soon force him to undo… …um… …whatever all this shit is.”

“Oh, I’m afraid I’ve completely wiped my old body out of existence,” said one of the black-skinned fitness models with mock sadness. “You’ll find no doughy-assed wimp to bully anymore, just an army of hard-muscled men itching to bloody you up.”

“Hah!” I snorted. “You expect me to believe that the little twerp has offed himself? Even if I believed in this magic shit, wouldn’t that be a bit over-dramatic?”

“Are you fucking kidding me?” replied tattoo guy #1 incredulously. “You think I want to cling on to being the prey when I can live out the rest of my life as the pack of predators?”

“I admit I didn’t originally plan to wipe my old body,” he continued. “But living as thirteen muscular alpha dogs can change your outlook in life. That constant rush of testosterone pumping through me and all that confidence and pride surging through my bodies - fuck! And every night suddenly becomes a mind-blowing mashup of over half-a-dozen sexual acts being performed on me at once.”

“Trust me,” said a shifty-looking one at the back with a sly grin. “It feels awesome having three of my cocks get blown, while fucking two girls in the ass and at the same time a slut in a nightclub is shivering with pleasure as she feels up every rock-hard inch of my sculpted torso.”

“But then there was always that little bit of me that felt weak, cowardly and shy. All I could do was jerk off it’s little wiener off as it fed on the sexual bliss from the rest of me  - Ugh!”

Four of the men shuddered with repulsion.

“I just had to jettison it.”

They were all fucking insane.

“I think I’m all set,” suddenly announced smirking guy #2. “Two of my bodies are getting ready to pound your girlfriend in a hot bisexual three-way while another is on the verge of tearing into your sweet little sister’s hymen.”

“I’ve been wondering what it would feel like to beat the shit out of you while I sent your precious girls into wave upon wave of uncontrollable orgasms,” he explained as he pounded a thick fist into his palm.

Then they all attacked as one.

Except for the one who walked off to the side to get a better view. Once settled, he reached into his pants and unashamedly and sensuously began to rub one out.