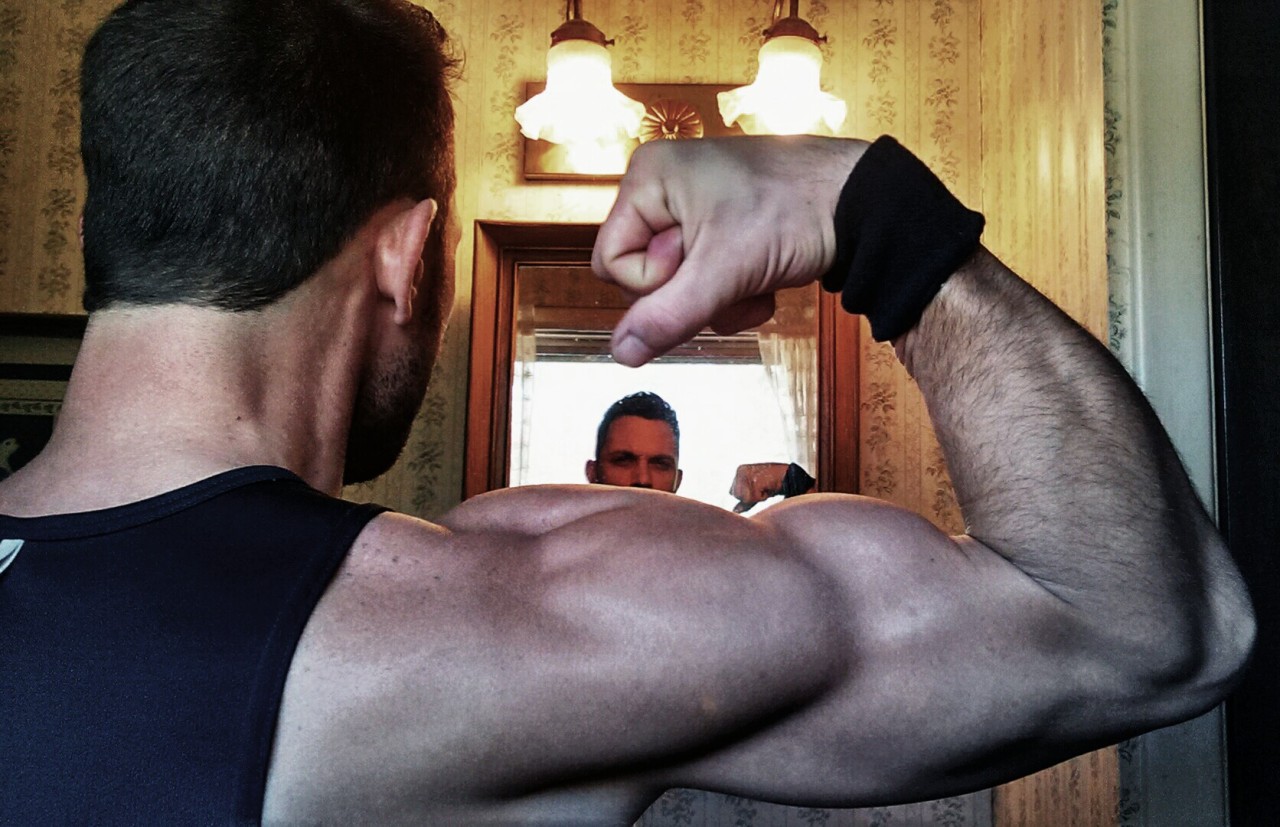 “Will you look at that?” murmured the titan as he flexed an enormous bicep at the mirror. It wasn’t just the size and strength of the muscle that was turning him on. His meaty forearm was now covered in a carpet of dark hair. His face had grown muscular, thick and brutish.

Every inch of him exuded manliness, power and sex. Ever trace of the thoughtful, feeble little boy he once was had been completely eliminated in the last week. The thought of his transformation was swelling his cock into a spasming column of virile manmeat.

The beast carefully removed a smartphone from his pocket. Once flashy and cool, his phone had just barely survived it’s master’s alarming metamorphosis and now sported numerous dents and battle scars from constantly being sat on by an ass seemingly made out of striated steel.

He carefully navigated through the frustrating minuscule icons of the phone with a thick digit. Eventually the musclebound thug was able to force the device to dial a number.

“Hey, Dad?” he crowed down the line while still admiring his magnificent reflection. “Is that you? This is your new meathead of a son calling!”

“Whaddya say? Oh, how’s Mom doing? Well the queen bitch has been cowering like a scared little puppy ever since I returned from our ‘fun’ little weekend. One glance at my tree-trunk legs and gorilla-sized arms and she was quivering like jelly. I did exactly what you told me to do - I gave her no explanation, but just sneered at her as if she was a disgusting piece of dog turd lying on the floor and walked into the house. She literally dropped down to her knees, babbling like some sort of crazy woman!”

“Now everything at home is SO fucking sweet - I give all of the orders and she just does them as if she was my personal maid. There will be none of that humiliating ‘Mommy’s Boy’ treatment for me any more - I’m the fucking man of the house!”

“I’ve had to get a whole new wardrobe since my little ‘growth spurt’ and I insisted that she pay for all the best designer labels money can buy. No more of that dorky bargain-basement shit for me anymore - my sweet bod needs to look the best at all times.”

“Fuck me, those new clothes really ate up into her savings for the new kitchen. But who gives a shit what she wants, right Dad?”

“School’s been unbelievable! I feel so ridiculously powerful when I stride down the corridors. I stand at least two heads taller than anyone else, a man amongst a sea of children, toppling every little squirt who dares to brush past my wide-ass frame.”

“Needless to say, five minutes back into school, I finally start scoring some seriously-hot pussy, left, right and center.”

“The bully I was talking to you about? He’s in hospital now. I don’t know what the exact medical terminology is, but I’m certain that his spleen shouldn’t be half ripped out of his torso.”

The smirking muscleman suddenly noticed a gentle stirring from the corner of the room.

“I have to go Dad. I’m been spending the night at some college chick’s apartment and she’s just waking up after hours of stupendous porno-quality sex. My cock’s just aching to rip up her sweet little ass again!”

“Anyway, bye Dad and thanks for everything!”